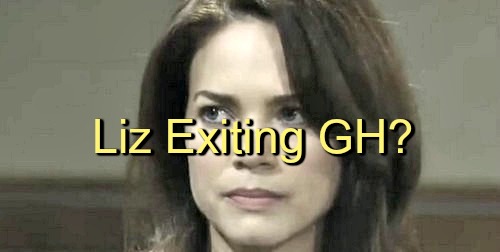 “General Hospital” (GH) spoilers have been non-existent about Rebecca Herbst’s contract negotiations since Nathan Varni’s Facebook faux pas where he put the blame for the stalled talks off on Herbst herself. But now Rebecca Herbst’s hubby is speaking out about his wife’s contract.

If you’re a long-time GH watcher, you’ll recognize her husband Michael Saucedo – he played Juan Santiago on GH in the late 90s- early 00s and then reprised the role in 2013 and again in 2014. The point is, the guy understands the behind-the-scenes dynamic at General Hospital.

General Hospital spoilers prove that Rebecca Herbst herself has been radio-silent about her contract status – even after Varni spoke out where he should not have. You have to admit she’s a class act. But is seems like her husband Michael took the chance to defend his wife in a recent twitter exchange with a fan.

Michael was asked in response to a non-GH tweet “any news u wanna tell us wink wink” from a follower called BeckySteveLover (an obvious homage to Liz and Jason). Saucedo could have ignored the tweet, but instead replied ‘nothing you want to hear.’

What we want to hear is that TPTB at GH and ABC have renewed this legacy character and amazing actress who is the only Hardy that remains on the show (aside from her kids). She’s the sole adult survivor of a Port Charles founding family!

So when Michael Saucedo (who surely knows her contract and renewal status) tells us it’s “nothing we want to hear” – that’s not good news. That likely means the contract talks for Rebecca Herbst are still stalled or, worse yet, have flopped and Liz Webber is on the way out!

On a recent Daytime Confidential podcast, site co-owner Jamey Giddens said he heard from an ABC insider that Rebecca was made an “insulting offer given how heavily she plays in the story.” Giddens also said that the way Rebecca Herbst is being treated “is shameful.”

We also know that “Days of Our Lives” has expressed interest in Rebecca Herbst coming over to the NBC soap. It would be very disappointing to GH fans if Rebecca was not renewed. There’s even an online petition to “save Becky.”

Given her blossoming friendship with Franco (Roger Howarth) and the coming troubles in the marriage of her ex Nikolas Cassadine (Tyler Christopher) and Hayden Barnes (Rebecca Budig), GH spoilers say there are lots of storyline opportunities for Liz that would be incredible to watch.

It’s particularly upsetting that we might lose Rebecca as a cast member – and Liz as a character – when she’s carried the show for the past year as part of the trio of characters Liz-Jason-Sam that have been the primary storyline for so long.

It was also hurtful that Rebecca wasn’t Emmy nominated for her outstanding work. We all know that she didn’t like Liz’s character turn that Ron Carlivati wrote – her big Jake Doe lie – but she embraced it and played it believably, so much so that scores of GH fans grew to hate Liz.

And now, just as her character is redeeming herself, the idea that they would reward that hard work and passionate performances with a pink slip is upsetting to GH viewers – as it should be. What do you think GH fans, was Herbst’s hubby Michael Saucedo telling us that hopes for her renewal are dead?