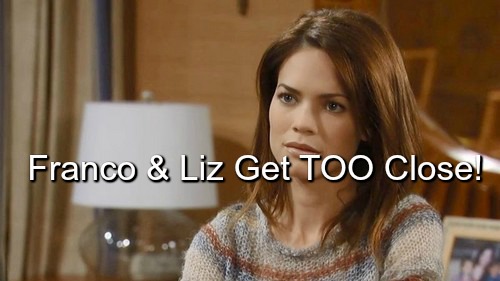 “General Hospital” (GH) spoilers tease that Franco (Roger Howarth) may grow far closer to Liz Webber (Rebecca Herbst) in upcoming episodes over the next few weeks than Nina Clay (Michelle Stafford) will like. And could the deepening friendship between Liz and Franco turn into more than BFFs?

General Hospital spoilers promise that Nina will be increasingly unhappy with Franco in coming episodes the week. Franco has made it clear to Ava Jerome (Maura West) that he’s heavily invested in Kiki Jerome’s (Hayley Erin) recovery and still feels like he’s her dad since he believed Ava’s paternity fibs for so long.

Ava is on board with Franco playing pseudo-dad since Kiki’s bio-dad Silas Clay (Michael Easton) is dead. But it’s not just Kiki that Franco is into. Franco is also heavily invested in Jake Spencer (James Nigbor) and his recovery and mental health.

Franco even video chatted with Jake at Shriner’s. That’s two kids Franco is bonding with while he’s simultaneously refusing to start a family with Nina because he says he won’t make a good father and no one will give them a kid anyway.

GH spoilers tease that is an inconsistency that Nina will definitely notice in this week’s episodes. Why is Franco fathering other kids while refusing to father one with her? Plus, another sign that Franina is on the rocks is that when Franco was breaking down over Kiki’s ordeal, it wasn’t Nina he called, but Liz!

Franco told Liz that he was sorry and that watching Kiki lie there broken, he gets how hard it was for her to see Jake like that. Franco said he underestimated what she was going through. What was even more interesting about this conversation was how Liz reacted.

Liz was with Jason Morgan (Billy Miller) who usually has 100% of her focus. Yet Liz didn’t make an excuse to ignore the call or rush Franco off the phone. She listened to him while he was all teary and sad and comforted him. That was kind of a big moment for Liz.

She’s always so laser focused on Jason that even her kids take a back seat, but she took time out from Jason, her issues with Sam Morgan (Kelly Monaco) showing up, and Jake – all to listen to Franco and offer a kind word to her new pal.

If nothing else, Franco and Liz are heading solidly into BFF territory. But could it be more? Nina will be hurt to know that Franco turned to Liz in his hour of emotional need instead of her. Are these two factors – the kids and his blossoming friendship with Liz – enough to split them up?

From Nina’s end maybe. And from Franco’s end, he’ll be aggravated with Nina in coming days when she continues to move forward with her family plans even though he’s clearly not ready. Will Nina and Franco split up soon?

And, if so, could Liz find herself in the shocking position of considering a relationship with the reformed serial killer? Since both have been the two most hated people in Port Charles at one time or another, they certainly have common ground.

And, in a way, Franco is the perfect step-dad to Jake since he knows what the kid is going through. Are these moments the beginning of an all-new “Friz” relationship? What do you think? Are you shipping Franco and Liz?