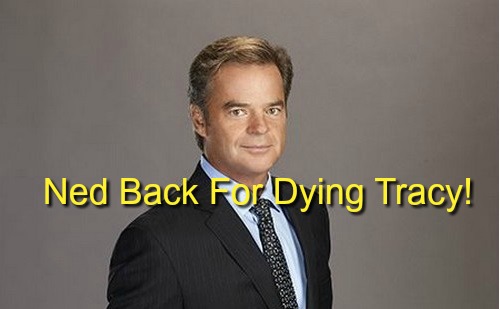 “General Hospital” (GH) spoilers reveal that Ned Ashton (Wally Kurth) will be back for a run of many episodes at the end of March. No doubt this has something to do with his mother Tracy Quartermaine’s (Jane Elliot) dire health situation.

Wally Kurth’s role as Justin Kiriakis on “Days of Our Lives” has been cut back so he’s got some time to reprise his role as Tracy Q’s eldest son and that comes just in time since she’s ailing and getting worse all the time.

Some General Hospital spoilers have hinted that Tracy may have been poisoned by none other than Larry Ashton (Hugo Napier) – Ned’s ne’er do well dad. If Larry is responsible, that would not sit well with Ned who already isn’t a fan of his degenerate dad.

Tracy is in the hospital right now and Dr Griffin Munro (Matt Cohen) will try and figure out what’s ailing her but GH spoilers hint that he’ll be stumped. If it was a tumor, aneurysm, or other common brain disorder, it seems like Dr Munro could figure it out easily.

The last time Ned was in Port Charles, he showed up for about five minute to dump Olivia Falconeri (Lisa LoCicero) over the Julian Jerome (William deVry) baby lie. Since the lie was Ned’s idea to start with, it seemed pretty hypocritical.

But it’s doubtful Olivia is the motivation for Ned’s return. It’s much more likely that Tracy’s brain drain is to blame. Aside from the morbid motivation for the visit, it will be nice to see both of Tracy’s boys together in one room – Ned and Dillon Quartermaine (Robert P Watkins).

The big question is, does Tracy end up with a dire diagnosis as she fears? Is Ned coming to Port Chuck because his mom is dying? Are we facing the loss of a legacy character? Will Ned step in for his mom and take on the burden of the ELQ lawsuit as well?

What do you think GH fans? Does Ned’s return spell bad news for Tracy’s fate? Share your comments below and check back with CDL often for more on Ned, Tracy and the Qs plus detailed “General Hospital” spoilers and news.