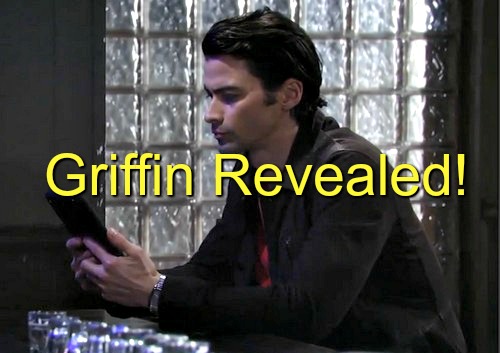 “General Hospital” (GH) spoilers indicate it may be a few episodes more this week, next week and a while longer before we found out precisely what Dr Griffin Munro’s (Matt Cohen) backstory is, but it’s clear that his Port Charles tie is Anna Devane (Finola Hughes), but who is he to her? Could Griffin be Anna’s child or Duke’s?

General Hospital spoilers tell us in Anna’s history, so far as we know, Robin Scorpio (Kimberly McCullough) is her only surviving child. Anna and Duke Lavery (Ian Buchanan) were pregnant together in the late 80s but at about four months along, Anna lost the child after an elevator she was in was rigged to fall by Olivia Jerome.

Olivia was Julian Jerome’s (William deVry) sister and he later killed Olivia J because she was thwarting some of his evil mob plans back in the day. Also, Anna was on “All My Children” for a while and had a child with David Hayward that died from a medical complication.

But GH spoilers say the child Anna had with David would only be 13 now – if she survived – and was a girl named Leona. So that knocks Griffin out of the running to be that kid – and the baby Anna lost that was Duke’s is the right age, but it was too early in the pregnancy to have lived.
Duke or Anna’s son?

It seems like it would be an absolute stretch for Griffin to be either Anna’s son that we’ve never heard of – or Anna and Duke’s child. However, given GH writers’ occasional lapses where they ignore character history, we can’t take these off the table – even though it would make no sense.

What is intriguing however, is the possibility that General Hospital spoilers might show that Griffin is Duke’s son by another woman. When Anna first saw Griffin, she recognized him as familiar. Duke has been heavily on Anna’s mind and she as much as told Dr Andre Maddox (Anthony Montgomery) that she had nothing to live for right now.

Griffin being Duke’s son would be like Anna getting back a part of the love of her life. But who could Griffin’s mother be? She could be just some woman that we don’t know whom Duke met and impregnated while he was outside of Port Charles (which was many years). Or… Is Griffin a Jerome-Lavery?

Another intriguing General Hospital alternative is that Griffin might be the child of Olivia Jerome. Back in the day, Olivia told Duke she was carrying his child but later said it was a lie. Julian then shot his sister in a crowded courtroom and she died.

But we know that mobsters fake death all the time. Olivia could have been carrying Duke’s son and somehow survived the shooting. We have a resurrected Jake Spencer (James Nigbor) running around Port Chuck, so anything is possible…

Someone could have faked Olivia’s death and she survived to give birth or gave birth while in a coma from the gunshot. Griffin then could have been placed for adoption way back when with the Munro family and only recently found out his brutal paternity story. Hmm…
When will Griffin come clean?

You’ll notice that Griffin has been hesitant to approach Anna – that’s likely because explaining who he is in relation to her will take a minute. If he was a Devane – one of Anna’s nephews – as some GH fans have theorized, Anna would already know him and that would be a quick introduction.

But explaining that he’s the long lost son of the love of her life would take more than just a quick conversation to explain. Perhaps Duke left Griffin’s mother to go back to Anna so Griffin is upset that his dad is dead and intrigued to know the woman that his father loved more than anyone.

But it would be really interesting if Griffin was the son of Olivia J and Duke because that would make him the son of the man Anna loved most in the world – Duke Lavery – but also a Jerome – the people that Anna hates most in this world.

However it plays out, it seems like Griffin could have a tie to Duke which gives him a tie to Anna. Let’s hope this isn’t another resurrection – or if it is, one that’s well thought out and properly explained. What do you think GH fans? Who do you think Griffin is?

Do you think he’s a secret son of Duke’s? Who do you hope Griffin is? Share your comments below and come back to CDL often for more “General Hospital” spoilers and news.