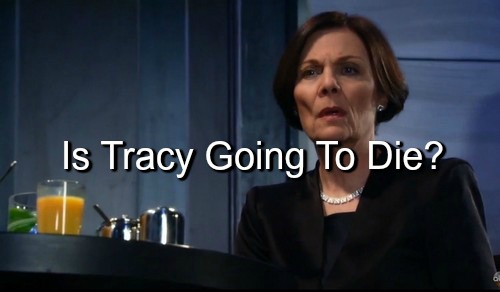 “General Hospital” (GH) spoilers indicate that legacy character may be in danger (on screen) of dying and leaving the ABC soap in a shocking development. Tracy Quartermaine’s (Jane Elliot) health problems will escalate in coming days and prove to be a medical mystery. But Is this just a short-term setback for the steely businesswoman – or are TPTB at GH planning to kill off a legacy character?

Let’s consider. If Tracy has met with foul play, Larry Ashton (Hugo Napier) is the likely culprit since he popped up out of nowhere then disappeared again – all seemingly for no reason but a casual conversation at a remote vacation getaway – this is too much of a coincidence not to have meaning.

General Hospital spoilers say if Tracy was the victim of poison, it could be lethal or non-lethal depending on what she was given and the dosage. The other alternative is that Tracy was already falling ill when she went on vacation and it was just happenstance that her symptoms manifested upon her return.

But either way – deliberate sabotage or “natural” illness – there’s the looming question of whether Tracy and her portrayer Jane Elliot will survive this storyline. With shakeups in leadership at ABC as reported by CDL,  and increased pressure on cutting costs, could GH be looking at cutting cast members?

Admittedly, the Quartermaines are legacy, but you only need one or two of a legacy family to carry on. Leslie Charleson as Monica Quartermaine has had a greater presence lately, so are two women of an age, unmarried and not likely to couple something the show might think is redundant?

Since Tracy’s primary love interest of the last many years – Luke Spencer (Anthony Geary) – is now permanently off the scene, it would be easy for writers to kill her off – or put her into a lengthy and possibly endless coma…

Alternately, writing Tracy as ill could be a bargaining tactic if Jane Elliot’s contract is up for renewal. It’s been done in the world of TV shows before to leverage actors to take a lesser deal to stick around for another season or two.

No matter what may be in play behind the scenes at General Hospital (or not), we have to prepare for the fact that Tracy may be either terminally ill or catastrophically poisoned and will face death one way or the other. It could even be Jane herself that’s considering leaving daytime – who knows?

But this storyline is flexible enough to offer an exit for the legacy character of Tracy no matter who’s driving the decision. What do you think GH fans? Do you think Tracy is on her way out and will be pushing up daisies at the Q family plot in coming months?

Share your comments below on what you hope is coming for Tracy and portrayer Jane Elliot and check back with CDL often for more “General Hospital” spoilers and news.