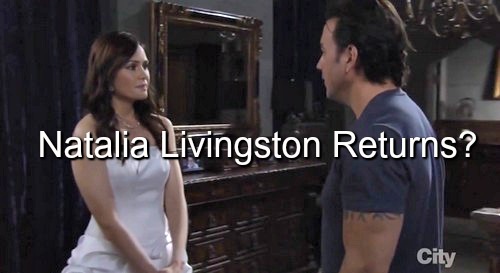 ‘General Hospital’ (GH) spoilers tease that Natalia Livingston could be returning to the ABC soap opera as fan favorite Emily Quartermaine, the long lost love of Nikolas Cassadine (Tyler Christopher). Livingston, who played the part of Emily Q. from 2003-2009 and again briefly in 2013, took to Twitter to let Frank Valentini that she wants to return to ‘General Hospital.’

‘General Hospital’ spoilers show that fans have been campaigning for Emily Quartermaine’s return to the soap for years, despite the fact that the character is very dead, but we all know that death is just a minor thing in daytime dramas and no one stays dead anymore (especially on ‘GH’).

A Twitter account was created in honor of “Bringing Back Emily” and Natalia Livingston retweeted one of their posts about her character’s rumored return to head producer Frank Valentini and added, “this would be nice.”

If Natalia Livingston were to bring Emily Quartermaine back from the dead – now would be the perfect time. Nikolas Cassadine just married Hayden Barnes (Rebecca Budig), only to find out that his new wife is not who she claims to be. Nikolas and Hayden’s marriage is not going to end well when her true identity comes out, and who better to pick up the pieces of Nikolas’s broken heart, than Emily Quartermaine?

Rumors of Natalia Livingston’s return always seem to be popping up, but they never come to fruition. Natalia Livingston has let ‘General Hospital’ showrunners know that she is ready for a return, via social media. There are plenty of ways to bring Natalia back – after all she does have an evil doppelganger out there running around named Rebecca Shaw.

Or it could be just another brief appearance as Emily’s ghost, like her return in 2013. Hey, for all we know Emily and/or Rebecca Shaw could have something to do with Hayden’s mysterious past.

What do you think ‘General Hospital’ fans, is it time for Emily Quartermaine’s return? Is it possible that she has already been filming – and that is why she sent out that tweet to Frank Valentini, to tease ‘GH’ fans? Let us know what you think in the comments below and don’t forget to check CDL for more ‘General Hospital’ spoilers and news.