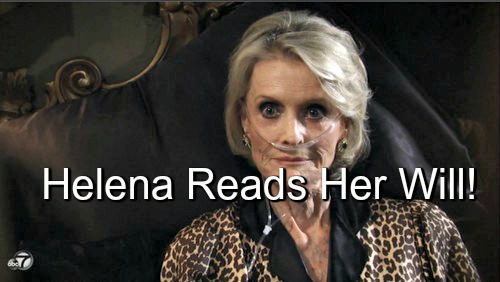 GH spoilers indicate that Helena herself will divvy up her worldly possessions courtesy of a video will that she recorded before she kicked the bucket. It makes sense that Alexis and Sam would be invited since Alexis is a Cassadine, but don’t look for Helena to be kind.

General Hospital spoilers remind us that since Mikkos Cassadine cheated on Helena with Alexis’ mom Kristin Bergman – and Helena slit her mom’s throat – there are no warm and fuzzy family feelings there. So why invite Alexis to the will reading at all?

It’s Helena’s last chance to insult Alexis and even better because Alexis can’t talk back since Helena will appear on video. Helena considers Alexis the lowest form of Cassadine since she was born on the wrong side of the sheets as a result of Mikkos’ philandering.

But GH spoilers ask what could Helena have for Alexis and Sam except for insults in future episodes? Let’s hope there’s lots because Helena’s acerbic tongue is always a delight. And since Sam was born out of a one night stand that Alexis had as a teen, no doubt Helena has “lovely” things to say about her quasi-granddaughter as well.

Does Helena have an actual black sheep to gift to Alexis? Or if Helena wanted to be really cruel and morbid, she could bequeath to Alexis the knife she used to slit her mother’s throat. Obviously, Helena would not leave anything of importance to Alexis since she hates her.

The same goes for Sam. Helena has a very low opinion of the both of them and considers them “less than” since their Cassadine blood is tainted by Alexis’ mother. And Helena also invited another mother-daughter pair to the will viewing.

Laura and Lulu Spencer (Emme Rylan) will be there as well. At least Helena loved Stavros and he loved both of them – although in terrifying ways. Perhaps Laura and Lulu will get a Stavros trinket – or find out the fate of that Lulu-Stavros embryo.

And there’s an exciting possibility that there may be a new Cassadine coming in, older than Nikolas. As eldest, a new Cassadine male would control the family. The will reading is set to kick off on March 11, but that’s a Friday so you know it will be a cliffhanger.

General Hospital spoilers say that the will reading could run over into the next week’s episodes and then Laura is supposed to go off on an adventure – according to GH spoilers – after the will reading. Will she be on the hunt for the mystery Cassadine? So, GH fans, what are you hoping to see at evil Helena’s video will reading?

Share your comments below and come back to CDL often for more “General Hospital” spoilers.