General Hospital (GH) Spoilers: Helena’s Will Reveals Clues to Unknown Lulu Child and Cassadine Back from the Dead 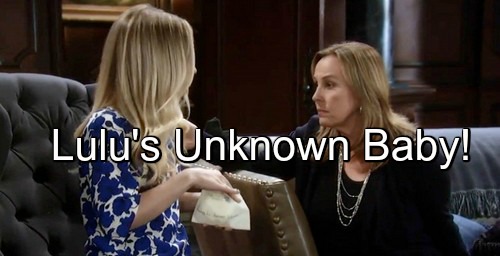 “General Hospital” (GH) spoilers reveal that Helena Cassadine’s (Constance Towers) games are far from done even though the evil old woman is pushing up daisies on Cassadine Island. Of particular interest are Helena’s gifts to Lulu Spencer (Emme Rylan) and her mother.

Helena told Lulu she owes her “the greatest and most sincere debt” because “Lulu has done the most for me – more than she’ll ever know.” Hmm. General Hospital spoilers claim that’s a head scratcher particularly with what she gifted her – an empty envelope.

But if you know the history of Helena and Lulu, this seems like an obvious reference to Lulu’s relationship (although unwilling) with Stavros Cassadine (Robert Kelker-Kelly). Since Helena loved Stavros beyond all reason, having a piece of Stavros would be precious.

Remember, Helena took from Crichton-Clark, after Stavros was killed by Dante Falconeri (Dominic Zamprogna) and just before the explosion, the embryo that was the child of Lulu and Stavros. You can’t imagine that Helena didn’t use that to hatch a mini-Stavros.

GH spoilers predict that the empty envelope could refer to Lulu’s empty womb since she is now infertile. Lulu can carry a child, but her eggs are not functional. Plus, you never know, Helena may have also found a way to steal the other embryo, the last Dante-Lulu embryo away.

This can go one of two ways – either Helena swapped out the embryos so when Lulu carries her next baby, she’s carrying the child of Stavros. Or Helena already had a surrogate carry the baby and Lulu has a young child out there in the world somewhere.

Helena told Lulu “you may not want to explore this” but “you would regret that.” Could Lulu’s bequest also tie into what Helena gave Laura Spencer (Genie Francis)? The key Helena gave Laura is supposed to be “the key to what you have loved and lost.”

GH spoilers ask could Stefan Cassadine be alive but stashed away somewhere? You’ll recall that while Laura never cared for Stavros, she did have very strong feelings for Stefan – she loved him – even though things didn’t work out between them.

Laura even thought for a time that Nikolas Cassadine (Tyler Christopher) might be the son of Stefan rather than Stavros, although that proved untrue. It was Cassadine madness that drove them apart and Stefan reportedly died 13 years ago during a fight with Luke Spencer (Anthony Geary).

But, as we know, Cassadines are hard to kill – they’re like royal cockroaches. So, in fact, Stefan might be alive and well and that key might lead to him. Could there be an older and much younger Cassadine stashed somewhere?

Laura needs a storyline, adventure and romance. And while Stefan Cassadine portrayer Stephen Nichols is busy over at “Days of Our Lives” showrunners can always do a recast with a plastic surgery plot. GH fans were excited by the notion that Michael Easton’s new character might be a Cassadine.

We know Easton will play a new doctor at GH and that Dr Marcus Byrne is in Port Charles looking for revenge. But Easton’s Doc Byrne could always be a Cassadine with plastic surgery – it is a soap after all. And his having a legacy tie would be amazing – but Easton may have nothing to do with this plot.

You’ll remember that Nikolas insisted that the will reading was no big deal because he’s the oldest Cassadine male. But if Stefan (or even Stavros) is somehow alive, that would put him in a subordinate position in the family. Fingers crossed it happens.

What do you think GH fans? Are we about to find out the fate of the Lulu-Stavros embryo? Does she have another kid out there somewhere about Rocco’s age? And what do you think about Laura’s key? Will it lead to love or loss for the legacy character?