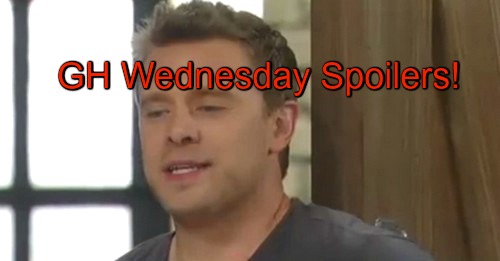 “General Hospital” (GH) spoilers reveal that Nina calls Franco on hypocrisy, Crimson has another calamity, and Kristina’s time has run out – all on the Wednesday March 16 episode of GH. Here’s the drama you can look forward to on tomorrow’s show.

Franco (Roger Howarth) is changing in that new GH locker room set that we’re now seeing on a daily basis. Nina Clay (Michelle Stafford) shows up to chew him out for going to Philadelphia when she thought he was at work.

Remember Nina looked like an idiot when she showed up looking for Franco when he had gone to see Jake Spencer (James Nigbor). She calls him on sneaking out of town. General Hospital spoilers tease that Franco defends his friendship with Liz Webber (Rebecca Herbst) but that makes things worse.

When Franco insists the Philly visit was more about Jake Spencer (James Nigbor) than Liz, Nina may snap. Franco is playing Daddy Warbucks to Liz’s son while denying Nina a child. She doesn’t like it and will bring that up. Franco is insistent that Jake is a patient and it’s apples and oranges.

But Franco has also been attentive to Kiki Jerome (Hayley Erin) and Ava Jerome (Maura West), so it’s not just that Jake is a patient. Franco sees himself still as a quasi-parent to Kiki. GH spoilers ask if Nina will give Franco an ultimatum about having a kid with her on an episode this week?

Franco and Liz both have things to talk about next time they see one another. Will he mention the great baby debate? And no doubt Liz wants Franco’s input on the twisted coloring book that Helena Cassadine (Constance Towers) willed to her that’s about Jake.

Will Franco have any insight to help Liz figure out what it means? Epiphany Johnson (Sonya Eddy) talks to Liz about Franco – she’s noticed them hanging out. Liz will tell her that Franco is treating Jake, but Epiphany misses nothing – she knows they’re friends now and getting closer.

Epiphany warns Liz about Franco. Soon it looks like Dr Liesl Obrecht (Kathleen Gati) will also be drawn into Franco’s baby debate with Nina. Later, Nina has to rush back to the office to deal with the latest Crimson catastrophe.

Looks like Julian Jerome (William deVry) sabotaged the magazine again – he was also the culprit in the green issue. GH spoilers ask what did Julian do to the “real women” issue? Upside down pages? Text printed backwards? And how long before Nina figures out Julian is to blame?

Maxie Jones (Kirsten Storms) and Dillon Quartermaine (Robert P Watkins) are stunned by what they see when they unbox the latest issue and Nina has to find a way to make lemonade out of this mess again. Of course, she will.

But when it all comes out that Julian is behind the mess, he’s going to be in trouble with all the women in his life. Nina will be upset, naturally, but so will Olivia Falconeri (Lisa LoCicero) since she was the cover girl and so will Alexis Davis (Nancy Lee Grahn) since the issue was important to their lawsuit.

Sam Morgan (Kelly Monaco) and Jason Morgan (Billy Miller) spend time together and Jason is surprised when Sam wants to put on the brakes – although that’s odd since they’ve already been going slow. Sam wants Jason to find himself before they move forward – she better be careful lest he finds that he prefers Liz!.

Looks like time is running out for Kristina Corinthos (Lexi Ainsworth) with her college crisis. Sonny Corinthos (Maurice Benard) asks Kristina to just tell him what’s going on and it looks like she’ll give him a censored version soon when she can’t avoid his questions any longer.

Meanwhile, Alexis looks to Molly Lansing (Haley Pullos) for answers about what’s going on with her sister Kristina. How much will Molly tell her? We know Kristina deleted emails from the college out of Alexis’ email account but is another tuition check returned? Trouble brewing there…

Don’t miss any of Wednesday episode, March 16 on GH and be sure to share your comments below on these storylines. And come back to CDL every day for detailed “General Hospital” spoilers and news.