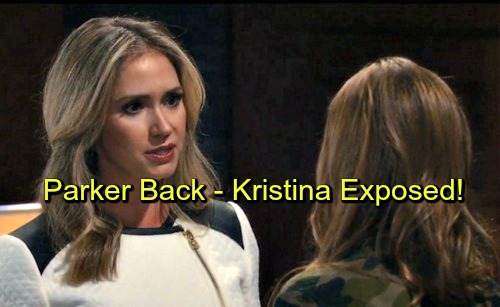 “General Hospital” (GH) spoilers reveal that Professor Parker (Ashley Jones) will be back in Port Charles on next week’s episodes, the week of March 14, to stir up drama. Last time we saw Prof Parker, she told Kristina Corinthos Davis (Lexi Ainsworth) that she was upset at Kristina making snarky comments about her online.

Kristina swore she was not doing it and Prof Parker went away. But that appearance let us find out that Parker has a wife and happy life she’s trying to protect. Then the revelation of juicy entries in Kristina’s diary clued is in that this was not a one-sided crush and there’s far more to it.

General Hospital spoilers say it looks like Kristina was hanging out with Parker outside of class and there was romantic interest on both sides, even if it was never acted on – yet… Now that Alexis Davis’ (Nancy Lee Grahn) wedding action has died down, her mom has time to take notice.

GH spoilers tease that Sonny Corinthos (Maurice Benard) will also soon notice that something is up with Kristina now that Morgan Corinthos (Bryan Craig) is out of Sonny’s hair and he’s got less drama in his life. Look for Sonny and Alexis to get together to discuss Kristina’s issues.

Kristina is still in denial and putting off coming out of the closet, but things are closing in and the revelation is coming soon. Kristina will finally come clean to one of her sisters, but which one? Will it be snarky Molly Lansing Davis (Haley Pullos) or big sis Sam Morgan (Kelly Monaco)?

GH spoilers warn that in a future episode Sonny and Alexis will finally figure out something is wrong at school since Sonny’s tuition check was returned and Kristina isn’t at school this semester. She gave a bogus story about independent study that’s better done away from her college.

But this story has more holes than Swiss cheese and will soon fall apart. Sonny and Alexis will question Kristina on school and find out there’s professor trouble lurking, but they don’t know how deep it goes and that it’s a romantic problem.

General Hospital spoilers tell us that when Prof Parker comes back to Port Chuck, things take a turn for the dramatic. Looks like Kristina will have to out herself to her parents, but does this mean her romance with her professor is on? Has Parker split with her wife and is coming back to claim Kristina?

How will Kristina’s parents handle the news that Kristina is in a May-December relationship with a professor and that it’s a woman? Alexis will no doubt be very understanding since her daughters have put up a lot with her romance with Julian Jerome (William deVry).

But how will Sonny handle the news that his daughter is into chicks? If he doesn’t cope well with it, he will pale in comparison with Julian who has adjusted well to the news that Lucas Jones (Ryan Carnes) is gay. Sonny wants to be better than Julian, so he’ll have to step up.

What do you think GH fans? Is Parker’s romance with Kristina really happening? Do you think Kristina’s family will respond with nurturing or naysaying? How do you feel about Port Chuck adding a lesbian couple into the character canvas?