General Hospital (GH) Spoilers: Griffin Confirmed As Duke’s Son, But Not Anna’s – Who Is The Mystery Mom? 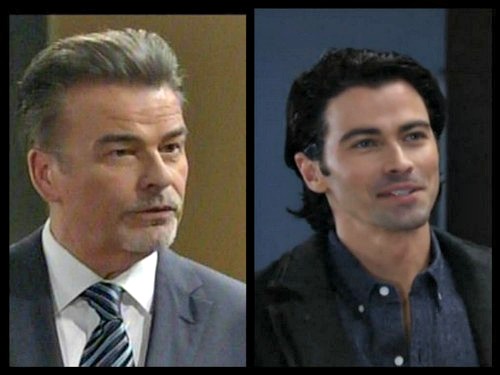 “General Hospital” (GH) spoilers point to a reveal that Dr Griffin Munro (Matt Cohen) is the son of Duke Lavery (Ian Buchanan) but not the lost child of Anna Devane (Finola Hughes). This is good on two points. First, we’re glad that Duke has a legacy and second, we’re glad Anna’s history isn’t being doctored.

CDL suspected in General Hospital spoilers ever since Anna first told Griffin that he looked familiar that she was seeing the love-of-her-life Duke in the doc’s kind eyes. We also know that Anna and Duke lost a baby at about four months into her pregnancy more than a decade ago.

It’s good that the writers are NOT retroactively giving Anna a child that she somehow lost track of – and it begs the question of who is Griffin’s mother. Whomever gave birth to Griffin and raised him, Anna won’t care. She will just be thrilled to have a piece of Duke back in her life.

Anna has been at loose ends since Robin Scorpio (Kimberly McCullough) and her clan moved to California, so Griffin’s reveal as Duke’s son will give her a new lease on life. Fingers crossed that Anna takes on the role of pseudo-mom to Griffin and moves him into that nice big house of hers.

Anna and Griffin will have many issues to address. First and foremost is Duke’s death. GH spoilers know that Anna will have to fill Griffin in on Julian Jerome (William deVry) being responsible for Duke’s assassination and Carlos Rivera (Jeffrey Vincent Parise) being the one who carried it out.

No doubt Griffin will encounter Julian out and about in Port Charles and we can only imagine how he will react to meeting the man to blame for his father’s death. While Julian has consistently and publicly denied giving the order to kill Duke, we know it’s a lie.

Julian told everyone that Carlos went rogue when he killed Duke. But neither Anna nor Sonny Corinthos (Maurice Benard) believe that. The reveal of Griffin as Duke’s son also explains some of Griffin’s annoyance with Sonny’s mob life – he should know that Duke was part of the Corinthos mob.

GH spoilers have to wonder who it was in Duke’s past that gave birth to Griffin. Based on portrayer Matt Cohen’s age (33) and Dr Munro’s status as a full-fledged doctor (rather than a resident), he’s in his early to mid-30s which puts his date of birth at 1983 or earlier.

This is important because it’s BEFORE the character of Duke was introduced in Port Charles. That leaves the options wide open. Griffin’s mom could have been back in Scotland or anywhere really. We also wonder if Griffin’s mom is dead and she’s the one he talked about losing to illness…

What do you think GH fans? Are you excited that Griffin is Duke’s son? Do you think he and Anna will bond right away or will there be hiccups as they get to know each other? Share your thoughts on Griffin’s family ties below and check back with CDL often for more “General Hospital” spoilers and news.