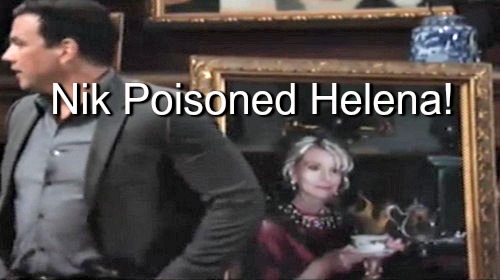 “General Hospital” (GH) spoilers reveal that Helena Cassadine (Constance Towers) is far from done tormenting her disappointing grandson Nikolas Cassadine (Tyler Christopher) – and her next scheme involves that weird portrait she left him in her will on Monday’s episode.

There are other paintings of Helena hanging around the mausoleum that Nikolas calls home, so why would she enlarge a photo of her drinking tea and have it framed so hideously and in that over-the-top style? General Hospital spoilers claim it all ties back to her sudden death.

Remember when Jason Morgan (Billy Miller), Liz Webber (Rebecca Herbst) and Sam Morgan (Kelly Monaco) came looking for answers from Helena back in November 2015? Helena had enough information to send Nikolas to prison for a number of crimes.

Was Nikolas scared his evil granny would throw him under the bus and send him to jail for his involvement in the scheme to keep Jason in the dark about his identity? Really, we have no idea how deep Nik’s involvements in Helena’s plotting goes.

GH spoilers ask if Nikolas knew all this time that Robin Scorpio (Kimberly McCullough) was being held against her will? Did he know his grandmother had Jake Spencer (James Nigbor)? Did he know Helena was holding Jason and experimenting on him?

You’ll recall that Nikolas exiled Helena to Cassadine Island and saw her occasionally. How could he not know what was going on there? Could Helena have implicated Nikolas in a bunch of her crimes? You’ll notice that the portrait was Helena drinking tea.

Was that poisoned tea? Was Helena letting Nikolas know by giving him that portrait that she knew exactly the moment that he killed her? Of course, the tea didn’t take effect immediately. That would have been too obvious.

The poison was likely intended to kill her in a few days and when Jason showed up then Liz and Sam, Nikolas was frantic to stop his grandmother from talking. He was likely hoping that Helena would die before anyone showed up, but his timing was off.

Fortunately for Nik, Helena kicked off before she could do more than make some snarky comments, but there’s more to this. In fact, there’s more to all the gifts that Helena handed out. This portrait may be evidence in a case against Nikolas to have him arrested for her poisoning.

But there’s also more to come from Lulu Spencer’s (Emme Rylan) empty envelope, Laura Spencer’s (Genie Francis) key – and the caveat in the Cassadine inheritance that only the eldest Cassadine male can inherit.

In coming weeks, look for Helena’s final revenge against those she hated, loved, and loved to hate plays out and she gets the last laugh from the great beyond. There’s no doubt Nikolas would poison Helena – after all, he had Hayden Barnes’ (Rebecca Budig) shot and then married her – the guy is twisted.

What do you think GH spoilers fans? Did Nikolas poison Helena to keep her from airing his dirty laundry to Jason, Liz, Sam and the world? Do you think he’ll get away with it? Or will the portrait prove to be a piece of the puzzle that will see Nikolas pay for his plotting?