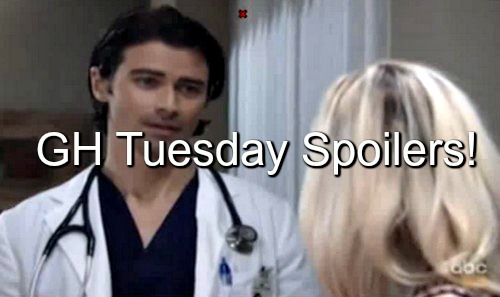 “General Hospital” (GH) spoilers reveal that Anna and Griffin will finally have that important talk about Duke on Tuesday’s episode, March 15. Will we learn about how Griffin got that bullet wound scar? Also more fallout from the will reading, Morgan and Kiki are both struggling, and Sonny and Ava are frustrated and scared parents.

Here’s what you can expect on tomorrow’s GH episode – Ava Jerome (Maura West) demands to know why Kiki Jerome (Hayley Erin) hasn’t woken after her surgery. She snaps and screams at the GH staff about why her daughter is still in a coma. Will anyone have answers for her?

General Hospital spoilers say that then Sonny Corinthos (Maurice Benard) goes to see his son Morgan Corinthos (Bryan Craig) who’s being held at the Freedman Clinic. But rather than finding that his son’s bipolar is getting more under control, Sonny finds that Morgan is spiraling worse than ever.

Morgan is horrified at what happened to Kiki, blames himself, and is still contemplating suicide. Can Sonny get through to Morgan? No way. Morgan is too hurt by Sonny and Carly Corinthos (Laura Wright) committing him that he can’t see reason.

Nikolas Cassadine (Tyler Christopher) talks to Hayden Barnes (Rebecca Budig) after the will reading. He’s frustrated by the hurts that Helena Cassadine (Constance Towers) dealt to his loved ones. Some of it was mysterious, but the stuff to Sam Morgan (Kelly Monaco) and Alexis Davis (Nancy Lee Grahn) was just evil.

And of interest is that CDL General Hospital spoilers called it 10 days ago that Alexis would be gifted the knife that Helena used to stab her mother in an advanced spoilers piece on the will reading.

GH spoilers are still waiting to see if there’s anything on the elder Cassadine as CDL predicted – Laura Spencer’s (Genie Francis) key may tie into that. Could Stavros or Stefan still be alive? Also, Lulu Spencer’s (Emme Rylan) empty envelope may tie back to that missing embryo. Wait and see – this is not done yet!

When Alexis comes at Julian Jerome (William deVry) with a dagger, he’s unnerved. Perhaps that’s because he has a guilty conscience for what he was doing when Alexis came into his office. Looks like Julian was the culprit behind the “green” issue of Crimson in an effort to ruin the magazine.

Nina Clay (Michelle Stafford) managed to bail the mag out so Julian is trying again on this week’s episodes and plans to ruin the “real women” issue of Crimson. What’s he up to this time? Alexis will be angry when she finds out he tried to sabotage the issue that’s critical to her lawsuit against the city.

Both Alexis and Olivia Falconeri (Lisa LoCicero) were counting on the Crimson cover of Olivia nursing baby Leo to help with the lawsuit against Mayor Lomax (Shari Belafonte) and will be upset if Nina can’t save the issue from Julian’s diabolical plans.

Curtis Ashford (Donnell Turner) makes an urgent call for someone he needs to see. Is he phoning Jordan Ashford (Vinessa Antoine) or maybe Hayden? Or could Curtis be talking to his new GF Valerie Spencer (Brytni Sarpy)?

Valerie won’t like it when Dante Falconeri (Dominic Zamprogna) comes at her with advice. Dante shares that he and Lulu are back together and Val will be nice about it, but definitely doesn’t want his input into her personal life.

Anna Devane (Finola Hughes) talks to Dr Griffin Munro (Matt Cohen) about why he was stalking her instead of just talking to her and telling her he’s the son of Duke Lavery (Ian Buchanan). What can Griffin say for himself? Was he checking her out first to be sure she’d be receptive? And what is up with that bullet wound?

Come back to CDL for more “General Hospital” spoilers after you watch the Tuesday March 15 episode – and check us out often for more news and updates all week long.