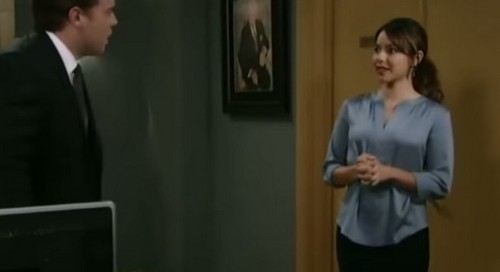 Check out these “General Hospital” spoilers for the Monday, June 15 episode. Monday will have tons of GH action and is a not to miss episode. Jake Doe (Billy Miller) and Sam Morgan (Kelly Monaco) are both investigating at ELQ but, for now, neither knows the other is doing it. Jake tells Michael Quartermaine (Chad Duell) that he found a bug Sam planted in the phones but Michael knows Sam is not the perp. But will Jake be distracted wondering what Sam is up to rather than focusing on true culprit Rosalie Martinez (Linda Elena Tovar)?

Morgan Corinthos (Bryan Craig) will get some more alone time with Denise DeMuccio aka Ava Jerome (Maura West) and they will end up getting cozy again. Sonny Corinthos (Maurice Benard) will caution Morgan away from Denise since he’s still certain she’s Ava no matter what the DNA results said. Morgan will be in trouble once Kiki Jerome (Haley Erin) finds out he’s hooking up with her mom again. But can you blame Morgan? He really, really loved Ava.

And new PCPD Commish Jordan Ashford (Vinessa Antoine) will soon find herself owing Sonny a big favor related to TJ Ashford’s (Tequan Richmond) recent wrongful arrest. Will Sonny strong arm the department store or the security guard to drop charges against TJ? Ric Lansing (Rick Hearst) will come at Jordan hard over her treatment of TJ even if is at the Mayor’s assistance.

And Lulu Spencer (Emme Rylan) will demand some answers from mom and dad Laura Spencer (Genie Francis) and Luke Spencer (Anthony Geary). Lulu doesn’t believe for a moment that Luke dumped Tracy Quartermaine (Jane Elliot) to get back with her mom in a romantic way. Laura and Luke come clean to Lulu but then swear her to secrecy which puts her in an awkward position with hubby Dante Falconeri (Dominic Zamprogna) and Tracy.

Tracy, meanwhile, will continue bonding with Sabrina Santiago (Teresa Castillo) over their shared heartbreaks of getting dumped just prior to getting hitched. Sam will show back up to update Sabrina on her Rosalie investigation. Turns out Tracy will approve of the investigation and happens to have some dirt on Rosalie that she’s willing to share with Sam.

Also Tracy gets really excited about the investigation and promises Sam that, if she catches the ELQ traitor spy, she will be back in her good graces with all prior controversies forgiven. Tracy even promises Sam she can have her sparkly new engagement ring that Luke just gave her. Problem is, it’s stuck on Tracy’s finger. Sam shows her how to get it off but doesn’t want to take it.

Tracy will push Sam to take it since she doesn’t want it. Really, who would want a reminder of getting dumped by the loser you decided to take back who then pooped all over you again? But then again, Patrick Drake (Jason Thompson) can certainly afford to buy Sam a ring. Plus, Sam already has a wedding ring and – by the way – a husband. Maybe Sam will pawn it as Tracy advised her to do.

Speaking of Sam’s husband, Liz Webber (Rebecca Herbst) will screw up Jake’s ELQ investigation by warning Nicolas Cassadine (Tyler Christopher) about bugged phones at ELQ and that Jake may soon be on to him. Wow. Just when you think Liz can’t get worse, she goes and tries to sabotage Jake’s new job. Bad enough she’s sabotaging his entire life. I am so not #TeamLiz on any of this…

Be sure to check out Monday’s episode of GH then head back to CDL daily for tons more “General Hospital” spoilers, gossip, casting news and more!