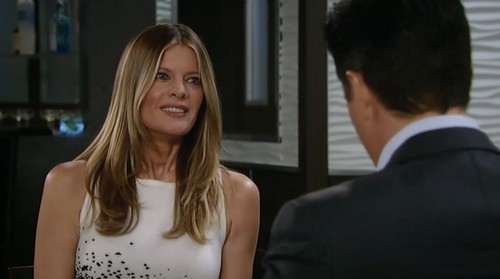 Here are some “General Hospital” spoilers for the Thursday, June 11 episode of the hit ABC soap. There’s lots happening in the build up to Friday’s GH weekly cliffhangers. First, while Michael Quartermaine (Chad Duell) seemed to accept the big pack of lies that Rosalie Martinez (Linda Elena Tovar) handed him, Mikey knows that something is amiss. So when Jake Doe (Billy Miller) comes in to interview for the head of security position, Michael hires him and sets him to work looking around ELQ for the spy. This bond will prove critical to Jake recovering more memories.

Really, though, Michael and Jake don’t have far to look for the traitor – no farther than Rosalie’s desk. But will it be Jake or the newly hired Sam Morgan (Kelly Monaco) that figures out that Rosalie is the spy and that she’s working for Nikolas Cassadine (Tyler Christopher)? Tomorrow, Sabrina Santiago (Teresa Castillo) will catch Rosalie eavesdropping on Michael and Jake’s conversation.

Rosalie will offer up some more lame excuses, but this will just fuel Sabrina’s suspicions that Rosalie is up to absolutely no good. And how disturbing is it that Nik has yet another minion working on helping him steal ELQ? We know Kyle Sloane (Grayson McCouch) has done dirty deeds before, but is he so desperate the he’s really going to do Nik’s evil bidding? Or will Kyle go to Michael and turn the tables?

And speaking of Nik, Liz Webber (Rebecca Herbst) will run tell the wicked prince that their Jason secret is on the verge of being exposed. Liz will worry that Jake spending time around Michael will kindle Jason memories. Liz will hope that Jake won’t get the job, but he will and her anxiety will amp up in the days to come – particularly once she finds out Sam is hanging around ELQ too.

But Sam isn’t at ELQ yet – she’s at the MetroCourt chatting up Nina Clay (Michelle Stafford). Sam wants to talk about the ELQ shares. Poor Nina – once again she’s telling the truth but no one wants to believe her. It’s the baby kidnapping all over again. Perhaps if Nina shows Sam the pile of cash in her hotel room safe, she’ll convince Sam she did sell the shares. That will put Sam onto Rosalie’s trail as the liar, not Nina or Franco (Roger Howarth).

Franco will have intrigue tomorrow too. Liesl Obrecht (Kathleen Gati) told Franco that Madeline Reeves (Donna Mills) could talk sense to Nina about new hubby Ric Lansing (Rick Hearst). But just as they hear Madeline is out of Pentonville and in Port Charles, she shows up. Likely it was Ric that got her out, but will Madeline continue to work with Ric or turn on him and side with Franco?

Last, there’s still the mystery to sort out about why TJ Ashford (Tequan Richmond) was arrested. Jordan Ashford (Vinessa Antoine) will demand answers from Dante Falconeri (Dominic Zamprogna) while Ric wants answers directly from TJ. It’s likely this all ties to Shawn Butler (Sean Blakemore). And when Molly Lansing (Haley Pullos) has a moment, she’ll thank her dad for helping TJ but let him know she does not like her new “mom” Nina at all.

Don’t miss a moment of the action in Port Charles – Jake could be getting his memory back at any time and you don’t want to miss that. Be sure to check back with CDL on the daily for lots more “General Hospital” spoilers and more!