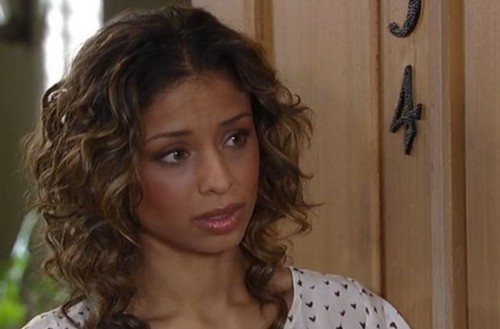 “General Hospital” spoilers reveal that Valerie Spencer (Brytni Sarpi) will split up a seemingly solid Port Charles couple soon, but the question is which couple will it be? The two most likely candidates are Dante Falconeri (Dominic Zamprogna) and Lulu Spencer (Emme Rylan) or Nathan West (Ryan Paevey) and Maxie Jones (Kirsten Storms). Let’s dig in and see how Valerie could wreck these relationships.

First, Nathan apparently has a past with Valerie. Remember when Valerie interviewed for her new job as an assistant at the Port Charles Police Department? Commish Jordan Ashford (Vinessa Antoine) asked Valerie if she had ties to anyone at the PCPD. Valerie said she knew Dante – obviously – but then she also mentioned she knew Nathan and that was it – just that tiny little mention. But that is so huge.

How does Valerie know Nathan? We’ve never seen them together in Port Charles, so what’s the deal? The deal is that Valerie and Nathan were exes back in New York before either of them came to Port Charles. But how serious were they? And has Nathan ever mentioned it to Maxie? Since Lulu has been complaining to Maxie about Valerie, it’s likely that Maxie mentioned it to Nathan but did he happen to say – hey, you should know, I used to date Valerie back in the day but it didn’t work out?

But Nathan didn’t happen to mention it and, when Valerie mentions it in front of her, Maxie won’t take it well and will think Nathan was hiding it from her. Also, now that Valerie is working at the PCPD, she’ll be spending lots of time with both Dante and Nathan. This will inevitably drive both Maxie and Lulu crazy and you have to wonder how Dante and Nathan will handle their jealousy.

So which couple will be driven apart by Valerie? Lulu and Dante seem rock solid plus they have Rocco cementing their family – plus they’re married. But Lulu has been known to fly off the handle and do dumb things. It may well be Lulu’s antics that puts her relationship with Dante more in peril than any affection that Dante develops for Valerie – he seems to have more brotherly feelings towards Valerie.

However, now that Dillon Quartermaine (Robert Palmer Watkins) is back in town, Lulu may rekindle their mischief-making and either Dante will misinterpret their friendship as something more or, maybe Lulu will make a misstep. She could easily get in too deep with Dillon. A kiss from Dillon if he misunderstands Lulu’s interest could prove disastrous if someone sees it and tells Dante.

But the more likely candidate for the couple splitting up is Nathan and Maxie. First, Nathan and Maxie’s relationship is newer and more likely to break. Plus Maxie is prone to do crazy things when she’s upset. If she thinks Nathan may still have some residual interest in Valerie, she may do something dumb like fall in bed with someone else to make herself feel better. And Nathan won’t take that well.

The bottom line is, whichever relationship is wrecked over Valerie, it more than likely won’t be Valerie’s fault – it will be the fault of the jealous women acting out that drives their men away. Either way, it will be fun to watch. If Maxie and Lulu really get out of hand, perhaps both relationships will go up in flames! Then Valerie could have her choice of Nathan or Dante.

Sound off in the comments below – do you think Maxie and Nathan and Dante and Lulu will survive the presence of Valerie in Port Charles and at the PCPD?

Be sure to check back often with CDL for lots more “General Hospital” spoilers and gossip!