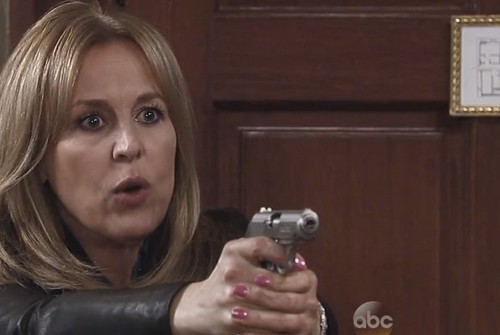 Friday’s GH show has lots of action and a big cliffhanger! Check out these “General Hospital” spoilers for the Friday June 5 episode of the ABC soap. Ava Jerome (Maura West) uses leverage to silence Silas Clay (Michael Easton) and forces him into revealing something. Everyone else may be buying this Denise DeMuccio story, but no way will Sonny Corinthos (Maurice Benard) allow himself to believe for one moment she’s not Ava. Could be dangerous and Ava’s new lease on life may be wasted, but she needs to buy some time for now.

Valerie Spencer (Brytni Sarpi) insists that she take Dante Falconeri (Dominic Zamprogna) and Lulu Spencer (Emme Rylan) out to celebrate her new job at the PCPD but he says they can’t go. Valerie pushes and may end up wrangling an invite to Luke Spencer’s (Anthony Geary) engagement party. Also, did you notice the brief mention in Valerie’s interview with Jordan Ashford (Vinessa Antoine) that she said she also knows Nathan West (Ryan Paevey)?

Valerie is an old flame of Nathan’s – could that spell trouble for Maxie Jones (Kirsten Storms)? How serious were Valerie and Nathan and for how long? Meanwhile, Nathan still has his sister Nina Clay (Michelle Stafford) in interrogation with Franco (Roger Howarth) and they’re trying to strong arm her into getting her marriage to Ric Lansing (Rick Hearst) annulled. They threaten to press charges against her for kidnapping baby Avery but Nina won’t cave and will tell them to go ahead – but they won’t!

Michael Quartermaine (Chad Duell) is surprised to hear that Tracy Quartermaine (Jane Elliot) and Luke are now re-engaged. If Michael heads to the party, he’ll get some face time with his parents. That could be good for everyone. Sonny shows up to the party and he and Luke bond and agree they’re all good. They also commiserate over the loss of Duke.

But another guest will not be so kind to Sonny. Scotty Baldwin (Kin Shriner) is there and won’t miss a chance to confront Sonny and push his buttons. Scotty will make it clear that he’s still after the Corinthos mob family and news that Julian Jerome (William deVry) is out of the life of crime will only whet Scotty’s appetite to shut down the last remaining mob organization in Port Charles.

Also, there’s another surprising guest that shows up at a Quartermaine party. Will it be Laura Spencer (Genie Frances)? She’s due in town soon, in fact today June 5 so expect her there! That would be pretty awkward when she shows up to her ex’s engagement party. Dillon Quartermaine (Robert Palmer Watkins) should be there, but he can’t be the surprise since we already know about him. Hopefully Denise isn’t dumb enough to show up there as well….

The party should be exciting and not to miss! Tune in to GH tomorrow then head back to CDL for lots more “General Hospital” spoilers and gossip.

This summer’s going to be a scorcher on #GH! Don’t miss it!