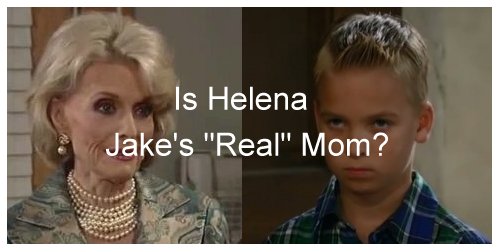 Consider this. Little Jake was with Liz for the first four years of his life. Sure those are formative years, but he won’t remember them. Then for the next four, he was with Helena Cassadine (Constance Towers).

We might assume the worst – that Helena kept the kid chained to a wall and tormented him psychologically since he was a Spencer (as far as she knew when she took him). But what if what she did was far more devious?

Remember that when Luke Spencer (Anthony Geary), Lucky Spencer (Jonathan Jackson) and Laura Spencer (Genie Francis) showed up, little Jake was happy, healthy and playing with toys. He seemed very at home on the island.

Is that because Helena raised him as her own? Did Helena show the boy love? It may not have been genuine, but he wouldn’t have known that. Did she raise Jake to call her mother and see her as his loving matriarch?

Sounds crazy, right? But remember at the Quartermaines when Liz mentioned that Helena was dead and gone, Jake deliberately knocked an expensive knick knack off the table. Is Jake traumatized by Helena’s death?

While everyone else is gleefully celebrating the end of the evil woman, is Jake deep in mourning over the loss of the woman he considered his mother? And is he growing slowly more angry at the callous remarks about Helena?

Are we finally going to see the “true” Jake come out soon? Perhaps Helena told Jake that she’s his mother and one day, “bad” people will come and take him away when she’s old and weak. Jake could see Liz and Jason as enemies.

Helena could have groomed him for years telling him that strangers will take him away, say he’s their child, and tell him lies. Over time, she could have lovingly and casually brain-washed him to think the absolute worst of his parents.

And now that Helena is gone, his tether may have snapped. No telling what Jake could do now. While Helena was nurturing Jake, she could have also taught him the art of poisoning, handguns, and bomb making.

There’s no telling just how accomplished a troublemaker Jake truly is – and what he might do next. What did Helena tell him about Cameron and Aiden? Did Helena teach him they were his adversaries? Is that why he hurt Cameron at Halloween?

After Liz mentioned Helena dying as a good thing, Jake broke the trinket, and then Liz tried to hug him – but he pushed away from her. Is this the beginning of the end for Jake playing nice and acting like he accepts his new family?

And one last thought – has Nikolas Cassadine (Tyler Christopher) known all along that Jake was alive? Nik has been in contact with Helena over the years, so wouldn’t he have seen the boy? Is that a secret yet to be revealed?

Let’s hope Liz gets Jake to Dr Andre Maddox (Anthony Montgomery) soon and sort this poor kid out before Jake implodes and does something he can’t take back and ends up in the juvenile wing at Shadybrook or, worse yet, Pentonville!

Be sure to check back often with CDL for more “General Hospital” spoilers, gossip and news!