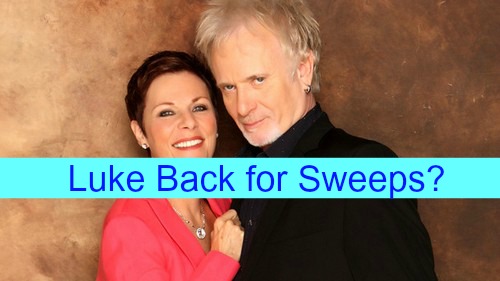 “General Hospital” (GH) spoilers reveal that Tracy Quartermaine (Jane Elliot) will see a familiar face while on her spa vacation that will stun her. Could it be that Luke Spencer (Anthony Geary) will show up to surprise his “spanky buns” while she’s getting a spa treatment?

After Ron Carlivati was axed from GH, Tony Geary said he would consider coming back for a worthwhile story arc. In addition to some health problems, it was Carlivati that drove Geary from the show. GH spoilers indicate that we may get the reprisal of Luke many GH fans have been hoping for.

It looks like Luke may surprise Tracy while she’s away from Port Charles on her vacation – but this will only be to set up a later appearance – perhaps in times for May sweeps. There have been several mentions of Luke out of the blue.

You’ll recall that Laura Spencer (Genie Francis) plopped down at Tracy’s table at the MetroCourt and asked if she knew how to get in touch with Luke. Laura wanted to tell Luke that his nemesis Helena Cassadine (Constance Towers) had kicked the proverbial bucket.

That was not a random encounter – more likely it was foreshadowing future events. Why bring it up at all unless it was significant? Then Tracy goes on a spa vacation that seems very ill-timed. Why would Tracy leave Port Charles when she’s trying to turn up the heat on Hayden Barnes (Rebecca Budig)?

Granted Tracy has been calling and hassling Hayden but still, it seems an odd contrivance to have Tracy randomly out of Port Charles. But it makes sense to put her somewhere remote if she’s going to encounter Luke.

That way, it would be easier for TPTB to keep it quiet that Tony Geary was making an appearance. If we see Luke, look for it to be just an episode or two – a very short cameo – where Luke is told that Helena died on Cassadine Island.

Luke will not accept that Helena is dead – why would he? And armed with this tidbit, Luke may head off to confirm whether Helena has faked her death yet again or if his nemesis of 35+ years has really gone off to keep the devil company in hell…

Helena’s “death” was way too convenient and way too uneventful to have been real. She croaked right before she could be asked about Jason Morgan’s (Billy Miller) brainwashing. Nikolas Cassadine (Tyler Christopher) swore he buried is grandma, but you can’t trust anything Nik says…

Plus Robin Scorpio (Kimberly McCullough) was doing life-extending research while being held as a Cassadine captive. Surely that’s important. But a Luke cameo now would set him up for an adventure where he can go off to find the truth about Helena.

Then, for May sweeps, we could have a final Helena-Luke showdown. The departures of both Helena and Luke were dissatisfying for GH fans. Wouldn’t it be much better to watch those two kill each other off in some explosive mortal combat?

No matter what TPTB have in mind, it will be interesting to see just who Tracy runs into on her spa vacay. Fingers crossed it is Luke and the new writers have devised a story arc that’s interesting enough to entice Geary back to GH – at least for a bit.

What do you think GH fans? Do you want Luke back for a short arc with a more dramatic exit than last time? Do you want to see Luke be the one to take Helena down for good? Share your comments below and come back to CDL often for more “General Hospital” spoilers and news.