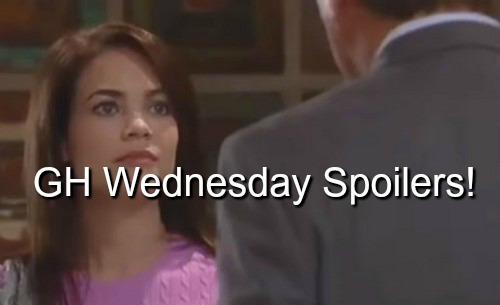 “General Hospital” (GH) spoilers reveals that a major new plotline kicks off on Wednesday, January 20 and it will involve Olivia Falconeri (Lisa LoCicero), Mayor Lomax (Shari Belafonte) and the rest of Port Charles as everyone takes sides.

We saw Olivia and Lomax argue over her decision to breastfeed baby Leo at the MetroCourt restaurant but when Olivia gets passionate about it, it looks like Lomax will have Olivia arrested. This sets off a chain of events that will put Olivia in the eye of a media and political storm.

This is the first “issue” storyline that the new writers have launched – and while it’s nowhere near as deep as the cancer or HIV issues have been in the past – it’s a socially relevant topic that has polarized people all across the US.

Olivia will be arrested and has to call Julian Jerome (William deVry) to come pick up little Leo at the PCPD. He’s with Alexis Davis (Nancy Lee Grahn) so she’ll likely come along. Will Alexis step up and be Julian’s baby mama’s lawyer over this? Likely so… For a change, at least Julian’s not the one in cuffs.

Also it looks like Nina Clay (Michelle Stafford) may come out swinging to help Olivia and could make an expose on Lomax’s crackdown part of her next issue of Crimson. Nina is determined to make it a splash and vows to Franco (Roger Howarth) that Julian will rue the day he set her up to fail.

Liz won’t like that but will give it a shot anyway. Another thing Liz won’t like is the talk Sam Morgan (Kelly Monaco) is having with Jason Morgan (Billy Miller). Jason asks Sam who could be coming after him and threatening Liz and the kids.

Sure Jason the hit man had enemies but aren’t those in the past – is murder ever in the past? Jason is worried it’s a vendetta against him and Sam volunteers to investigate. Sam, naturally, thinks it’s Liz making much ado about nothing to keep Jason on the hook.

Turns out Andre Maddox (Anthony Montgomery) is more than just a workaday shrink – he’s a criminal profiler who works for government agencies – and he and Robert Scorpio (Tristan Rogers) are associates. Robert brings him by to consult with him and Anna Devane (Finola Hughes) on a case.

Robert wants Andre to profile Carlos Rivera (Jeffrey Vincent Parise) and perhaps Sabrina Santiago (Teresa Castillo) to figure out where they’ve run off to and how they can nab the fugitive couple. On the run, Sabrina admits to Carlos that Anna may be on to them and she begins to panic.

Sabrina wants to phone Port Charles to check on things, but Carlos won’t let her. Sabrina will get uncomfortable with them fleeing justice. Will what turned out to be her leaving voluntarily with Carlos turn into more of a kidnapping scenario when he tries to control her?

Don’t miss a moment of the action on the Wednesday, January 20 episode and check back with CDL for detailed daily “General Hospital” spoilers.