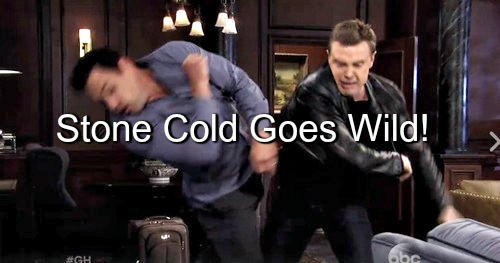 We know that Jason found out that Shawn Butler (Sean Blakemore) was gunning for him, but he doesn’t seem to blame the trigger man, why would he? But does Jason have some lingering hostility towards Sonny Corinthos (Maurice Benard) for ordering the hit?

Perhaps Stone Cold would get it, but new Jason is not that guy in terms of understanding how someone could dispassionately order the death of another human. The General Hospital spoilers video shows what looks like a tense confrontation between Sonny and Jason, but that could be clever editing. 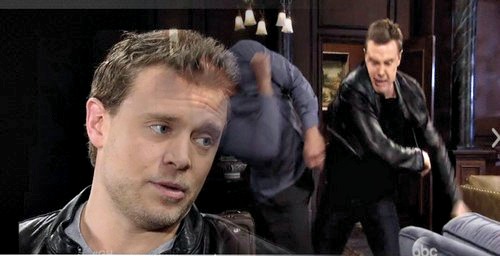 What’s certain, though, is that Jason is holding Nikolas Cassadine (Tyler Christopher) responsible for having Hayden Barnes-Rachel Berlin (Rebecca Budig) shot for trying to tell him the truth. Jason will physically assault Nikolas in coming days.

In the fight scene, we see Nikolas in the same blue shirt he was on Monday’s show and a suitcase nearby so it looks like Nikolas is heading back to Wyndemere (or is already there) and ready to figure out what to do about his angry wife.

GH spoilers reveal that Jason and Sam Morgan (Kelly Monaco) will both be stunned by something Nikolas says to them and Jason will react badly. Nikolas usually backs down, but will he this time? There’s no balcony there for Jason to throw him off of, so maybe not! 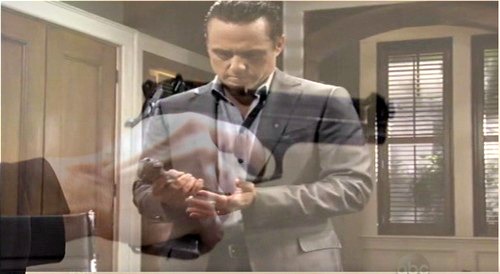 We also see Jason brawling with Curtis Ashford (Donnell Turner) in the spoilers video. GH spoilers reveal that Curtis will offer to work for Nikolas soon but really is scheming with his pal Hayden to keep her safe and secure her future.

Does Curtis intervene when Jason is beating Nikolas and ends up with a job working security for Nikolas? Whatever he does, it looks like Curtis will end up on the receiving end of a couple of vicious hits from the former mob enforcer.

If anyone can hold their own with Jason, it’s tough guy Curtis. What’s curious also is how Jason will deal with Sonny now that he knows for sure that the Port Chuck mob boss tried to have him whacked back when he was Jake Doe.

Will Jason forgive and forget? Will the brawl between Curtis and Jason result in those two becoming enemies? We know that Sam will ask Jason to take it easy on Nikolas – let’s hope that the brutal punishment Jason handed out to Nik wasn’t him “taking it easy.”

Is this the start of a slippery downhill spiral to Jason turning violent once again? What do you think GH fans? We know Nikolas can’t stand up to Jason in a fight, but how will Curtis do? Is Curtis just as big of a tough guy as Jason? Is Jason turning Stone Cold again?

Ready or not…This week on #GH.