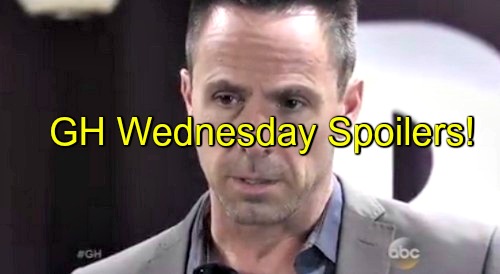 “General Hospital” (GH) spoilers tease that Julian betrays Alexis on tomorrow’s episode on Wednesday, April 27, plus Hayden gets canned, Lexi visits Morgan, Sam and Jason are stalked, and someone’s life is at risk. Check out what’s coming on the next episode of GH.

Jason Morgan (Billy Miller) takes Sam Morgan (Kelly Monaco) on a ride to blow off some steam and they run into bad weather. They’ll take shelter from the rain in a familiar looking stable. Remember the stables at the house Lorenzo Alcazar (Ted King) gave Carly Corinthos (then-Tamara Braun)?

It looks the place where Nikolas Cassadine (Tyler Christopher) romanced Courtney Matthews (Alicia Willis) a decade ago also in a storm. It’s a great place for a little romance while they wait out the rain. Too bad someone followed them out there and is now peeking in the window.

General Hospital spoilers who is stalking Jason and Sam? Is it someone after them both or is this the long-awaited enemy of Jason’s we’ve heard about in GH spoilers? Whoever it is, they’re creeping around and watch Jason and Sam get intimate. And no, it’s not Franco (Roger Howarth) since he wasn’t in the Rib when they left…

Julian will NOT tell Alexis the truth and makes it something about the newspaper or other nonsense, but when the witness, Hale, turns up dead, Alexis will realize that Julian has betrayed the promises he made to her when they got hitched.

Looks like Tracy Quartermaine (Jane Elliot) has taken a serious liking to Dr Hamilton Finn (Michael Easton) and wants to make sure he sticks around. How long til Monica Quartermaine (Leslie Charleson) gets her way and brings Finn on as a permanent staff member?

Tracy also talks to Hayden Barnes (Rebecca Budig) and gives her the bad news that she’s canned from ELQ and working with her. Since Jason got the stock back, Hayden is not needed. Hayden’s day gets worse from there and she takes solace with Curtis Ashford (Donnell Turner) at The Rib.

Curtis thinks that Hayden should get whatever money she can and leave Port Chuck but Hayden still thinks there’s more to her story with Nikolas. Plus, Hayden is not the kind of woman that backs down from a challenge and she has nothing to lose now.

Alexis has to break the bad news to Carlos Rivera (Jeffrey Vincent Parise) about the witness soon and he’ll be in a panic but it looks like that won’t matter since the witness runs into trouble. Doesn’t it feel like Sonny Corinthos (Maurice Benard) trumped up Hale’s statement to nail Carlos?

John DeLuca’s premier as Aaron was delayed by a day and we’ll meet the new hunk in town on Wednesday and he’s hot enough to catch the eye of Kristina Corinthos (Lexi Ainsworth). Also, Kristina gets some face time with Morgan Corinthos (Bryan Craig) and they catch up.

Dillon Quartermaine (Robert P Watkins) is going above and beyond to strike up a friendship with Kiki Jerome (Hayley Erin) and has lured her out of the apartment. But can he get Kiki to open up to her about her fears and why she’s been hiding out at Franco’s (Roger Howarth) place?

All this and more coming on the Wednesday’s episode, April 27 of GH – watch then check back with CDL for more “General Hospital” spoilers and news.