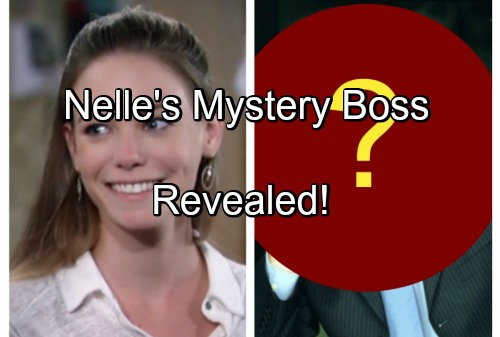 General Hospital (GH) spoilers sources say that Nelle Hayes (Chloe Lanier) is not who everyone thinks she is, and there are many possibilities of who she is working for. GH fans knows that something isn’t quite right about Nelle and how she wormed her way into the Corinthos family so easily, and why her presence in Port Charles made Jasper “Jax” Jacks (Ingo Rademacher) so nervous.

General Hospital spoilers suggest that Nelle working with Jax would be a very obvious strategy. Jax has hated Sonny Corinthos (Maurice Benard) since the second he arrived in town, and they have had their share of rivalries over women, including Brenda Barrett (Vanessa Marcil) and Sonny’s current wife, Carly (Laura Wright).

On the Tuesday GH (November 8, 2016) episode Jason (Billy Miller) and Samantha Morgan (Kelly Monaco) discovered that the last call Julian Jerome’s (William DeVry) bodyguard, Pete, got was from an escort service. Is there a possibility that the call came from Nelle, who was working for Jax?

Sonny being blamed for the bombing and drowning in guilt over killing his own son, may prove to be the end of Sonny for good according to GH spoilers. Of course we know that Sonny will not commit suicide but the existence of a plan to destroy him makes sense.

General Hospital’s Valentin Cassadine (James Patrick Stuart) could also be in cahoots with Nelle. We don’t have a lot of history on Nelle, other than she is possibly the kidney donor to Jax and Carly’s daughter, Josslyn Jacks (Eden McCoy). GH spoilers on CDL say Valentin could be the son of crime lord, Charlotte Devane (Samantha Eggar), did Valentin use Nelle to get close to the Corinthos family, and collect information on Sonny?

When Valentin arrived in Port Charles, he shared an odd look with Ava Jerome (Maura West) causing speculation that he knows about Nelle catching Ava sneaking into Morgan Corinthos’ (Bryan Craig) room; maybe Nelle knows what Ava was really up to, and has the real bottle of Morgan’s Lithium.

The last person, Nelle could have ties to Julian Jerome himself. Julian has lost everything, after it was revealed he was still a crime boss, he lost the love of his life, Alexis Davis (Nancy Lee Grahn). Julian was desperate to win Alexis back, but when she rebuffed his advances, he took the blame out on Sonny. Julian may have planted the bomb himself on his car, hoping it was his body guard who died in the explosion but Sonny got the blame.

What do you all think? Nelle seems to have some deep dark secrets that still need to come out and who she is working for will rattle a lot of GH fans’ minds. Either way, it looks like she is involved with some shady people, and playing a very dangerous game.

Failure is definitely not an option. pic.twitter.com/VYkNmqGN5i