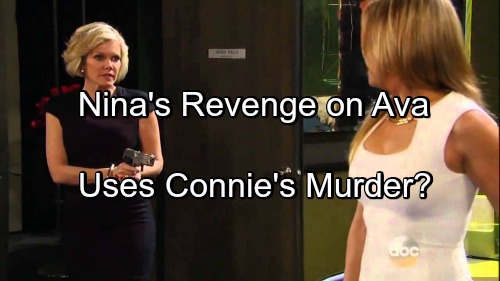 General Hospital spoilers (GH) show that the war between Nina Reeves (Michelle Stafford) and Ava Jerome (Maura West) is clearly not over. Many years ago, Ava had an affair with Nina’s husband, Dr. Silas Clay (Michael Easton). Nina fell into a coma after her mother, Madeline Reeves (Donna Mills) overdosed her on antidepressants, causing her to (supposedly) lose her baby.

General Hospital fans who have been watching the past few months, know that Nina is desperate to have a baby and has even hired Curtis Ashford (Donnell Turner) to help her find a baby to adopt; because of Nina’s poor GH medical and mental history, and the fact that she kidnapped Avery and took off with her, doesn’t make her a good candidate for adoption – so it would have to be off the books.

General Hospital on Friday September 2 showed Nina and Curtis waiting in the park for a young pregnant woman, named Bridget, who is willing to meet Nina and talk to her, to see if she would be a good mother to her unborn baby girl. General Hospital spoilers remind us that things were going great, Nina told Bridget that her the baby will want for nothing because she is rich and that she will love the baby with all her heart. Ava arrived and ruined everything, she warned Bridget to stay far away from Nina, and gives her some of Nina’s history to scare her off. “She is a lunatic in sheep’s clothing!” 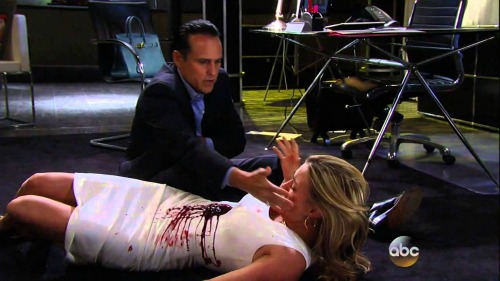 Anyone who watches General Hospital will know that Nina Reeves is not a woman to give up on things, when she is determined to get something, she will do anything she can to get it. Ava Jerome loves to throw other people’s mistakes in their faces, but has never owned up to anything she has done – and as all GH fans know Ava has done the worst things imaginable.

When Bridget leaves the park saying this was a mistake, Nina doesn’t hold back: “Look what you’ve done.” You can see the blood boil within Nina. The irony of when Ava tells Nina that “actions have consequences.”

It looks like Nina is gearing up for revenge on Ava. Nina doesn’t care if Ava is part of the Jerome crime family, she grabs her and has nothing but hatred in her eyes. Her brother, PCPD Detective Nathan West, (Ryan Paevey) arrives as the argument escalates. When he asks what is going on, Ava has no problem telling him that his “deluded” sister is trying to buy some poor girl’s baby.

Instead of Nina snapping back, she calmly tells Ava that she has changed, but Ava has not; Ava is still the same “hypocritical liar” she has always been and ends with the threat, “somehow, someway, that is going to come back and bite you.” Ava retorts that “no one has ever been able to prove a thing about me, but I can’t say the same about you.”

General Hospital’s Ava walks away and Nathan comforts Nina who looks close to her breaking point. He tells her things are going to be okay and Nina says, “It’s far from okay.” One cannot help but feel, that Nina is the key to taking Ava down. Nina has worked with, and for Ava’s brother Julian Jerome (William DeVry).

Which side are you on, Nina or Ava’s? Do you think Ava was right in warning Bridget away from Nina, or did she just spark a fire she will not be able to control? Come back to CDL for all your General Hospital spoilers, news and updates!