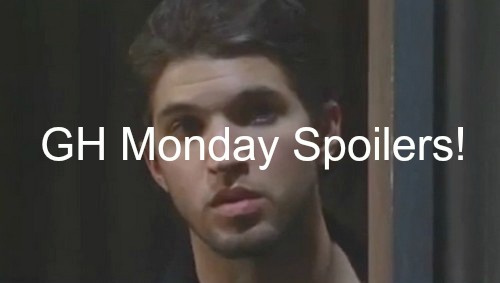 “General Hospital” (GH) spoilers for Monday February 22 reveal that the Julexis wedding kicks off, Anna tries to stop a disaster, the gun running deal will go south and lives will be at risk – all while most of Port Charles is oblivious to the impending disaster. Here’s what you need to know.

Anna Devane (Finola Hughes) is taking dirty DA Paul Hornsby (Richard Burgi) at his word that he’s working undercover and is planning to bust Dixon (Troy Ruptash) and Raj (Sammy Sheik) at the gun deal that evening. Anna rushes to try and help him get the backup he needs.

Anna also has to make sure that Sonny Corinthos (Maurice Benard) and his men don’t interfere with the bust going down at the docks and make things worse. Anna is desperate to find Sonny and warn him but he’s already gone to the church early to see Kristina Corinthos (Lexi Ainsworth).

Instead of finding Sonny, Anna finds Michael Quartermaine (Chad Duell). Will Michael tell Anna that Sonny has gone to the wedding? Anna has no idea that Sonny is operating on a different timeline of assumptions.

As far as Sonny and Max Giambetti (Derk Cheetwood) know, the deal is going down at midnight since Sonny would not listen to Morgan Corinthos (Bryan Craig) when he tried to tell him the time for the deal changed and is now 6 pm.

Morgan did, however, leave a very specific voice mail for Kiki Jerome (Hayley Erin) that has all the information she needs to run down to the docks and try to save his cheating butt from danger. It looks like Kiki will end up in danger thanks to Morgan.

Morgan overhears Paul and Dixon talking, but will lurk a while longer before he makes a move. Will Paul notice that Sonny’s son is at the docks and try to shoo him away? Will Paul call Anna about the backup he needs?

Dixon overhears Paul talking to someone and he and a henchman confront Paul about it. Will Paul’s life also be in danger at this deal? Will Dixon figure out that Paul is playing double agent? Lulu Spencer (Emme Rylan) continues to struggle against her bonds on her boat and will be in more danger soon.

Also dealing with mob stuff is Carly Corinthos (Laura Wright) who is stunned to hear Josslyn Jacks (Eden McCoy) casually bring up Sonny’s mob lifestyle while they are at dinner. Is Carly so numb to the criminal activity that goes on around her that she thought Josslyn wouldn’t notice?

This is the first in a series of red flags that will have Carly soon rethinking some of her life choices when it comes to Sonny and the mob. Coming days will send Carly more signals that she needs to rethink some of the violence in her life.

At the MetroCourt, Olivia Falconeri (Lisa LoCicero) sees something that makes her think maybe she misread her premonition about Julian Jerome (William deVry) and it’s really no big deal – but she wasn’t wrong and he will end up with blood on his hands before all is said and done.

Alexis Davis (Nancy Lee Grahn) is surprised to see baby daddy Sonny at the church when she and her girls get there to get ready for the ceremony. Sonny makes a peace overture and tell her that he wants to be there for Kristina even though Julian is not his favorite guy.

Also excited about the big wedding is Nina Clay (Michelle Stafford) who seems ready to settle down with Franco (Roger Howarth). How will he handle this serious commitment talk from Nina? Franco loves her like crazy, but the marriage and baby talk may freak him out.

Maxie Jones (Kirsten Storms) finds a white glove in Nathan West’s (Ryan Paevey) pocket. What is that about? Maxie is surprised by the explanation. And out at Wyndemere, Hayden Barnes (Rebecca Budig) feels confident that her schemes will work out soon.

She beds hubby Nikolas Cassadine (Tyler Christopher) with no clue that he’ll soon know all about her secrets since Sam Morgan (Kelly Monaco) is on the case and investigating her shady past starting with Baxter Corbin (Tom Parker).

All this and so much more on the action-packed GH episode on Monday February 22. Don’t miss a moment of the mob and wedding events and come back to CDL for more “General Hospital” spoilers and news.