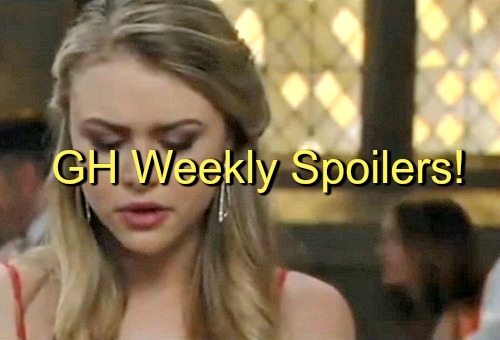 “General Hospital” (GH) spoilers for Monday February 22 thru Friday February 26 reveal that Julian Jerome (William deVry) and Alexis Davis (Nancy Lee Grahn) will see their happy day ripped apart by mob violence and many lives will be at stake. Here’s what to expect.

Before the wedding kicks off, Nina Clay (Michelle Stafford) stuns Franco (Roger Howarth) by mentioning she’d like them to get hitched. Is Franco down for that? He certainly seemed nervous when she started talking babies – will he commit or clear out?

Maxie Jones (Kirsten Storms) finds something strange in Nathan West’s (Ryan Paevey) pocket before they head over to the wedding. They’ll have tender interactions later after the events at the wedding go bad. Alexis looks lovely in white, but red will soon be the color of the day!

Brad Cooper (Parry Shen) whispers to Lucas Jones (Ryan Carnes) as the wedding begins that they may have a wedding of their own soon. Looks like Brad worked it out so he can divorce Rosalie Martinez (Linda Elena Tovar) and get hitched to his man.

Brad also has a present for Lucas that means a lot. All of this sweetness goes down before violence erupts at the church. Anna Devane (Finola Hughes) tries to avoid all this mess by warning Sonny Corinthos (Maurice Benard), but it looks like she’s too late to stop things from going bad.

Down on the docks, Morgan Corinthos (Bryan Craig) is clearly out of control but at least he’s not rushing out and firing wildly – at least not yet – but is hanging back and listening to what’s going on. Paul Hornsby (Richard Burgi) is intent on seeing the gun deal and undercover bust go off smoothly.

But Dixon (Troy Ruptash) gets agitated when he thinks Paul is talking to someone that he shouldn’t be. Kiki Jerome (Hayley Erin) will also be down at the docks since Morgan left her that crazed message that was eerily specific on what was happening and where.

After Kiki listens to the voice mail, it looks like she’ll try and get Morgan out of the mess he’s put himself in – but instead, she’ll end up in trouble too. Will both Morgan and Kiki be in danger? Spoilers indicate that Kiki could be shot in the crossfire. Lulu Spencer (Emme Rylan) is tied up but then things get worse when Raj (Sammy Sheik) tosses her overboard to drown.

Look like at least three lives are on the line down at the docks and then more when Dixon bursts into the church after the gun deal goes bad. Dixon comes in guns blazing and takes Sonny hostage because he mistakenly thinks the mob boss is defenseless. When will Sonny stand up and shock everyone?

When Nathan makes a move to try and help Sonny, he’ll be mildly injured which will cause him to spout some things off to Maxie that surprise her. Anna tries to keep things calm but that won’t work. People will be wounded in these events – but will anyone lose their life?

Will Dixon be taken out or arrested? Later, Jordan Ashford (Vinessa Antoine) will rage at Anna and Paul for not pulling her in on this deal. Jordan doesn’t like that they were scheming behind her back and put lives at risk.

Ava Jerome (Maura West) has reason to believe the worst after Carly Corinthos (Laura Wright) breaks some bad news to her. Looks like Carly actually feels sorry for Ava just this once. Ava and Franco bond over their love for Kiki and support her during coming events – is Kiki shot and fighting for life?

Carly isn’t happy to find out that Morgan is off his meds and engaged in mob violence down at the docks – and that’s on top of Josslyn Jacks (Eden McCoy) talking about Sonny’s mob interests. Has Carly finally had enough of this violent lifestyle?

She and Sonny have to decide what to do about Morgan since he’s clearly off the rails and can’t make the right choices for himself. Two people will get closer during a near death event – is it Lulu and Dante Falconeri (Dominic Zamprogna)? Will he save her life and they reunite?

In non-wedding events, Hayden Barnes (Rebecca Budig) will come clean to Curtis Ashford (Donnell Turner) about her past and he’s shocked. Does Hayden need Curtis to help her carry out her mission with the legal documents? Or did she just need someone to talk to about her problems?

This is a must-watch week as all of the February sweeps events come to fruition. Watch Monday February 22 thru Friday February 26 and be sure to check back with CDL every day for more “General Hospital” spoilers and news.