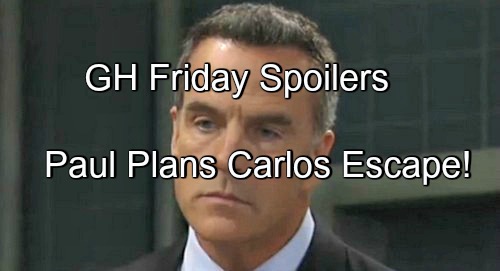 “General Hospital” (GH) spoilers tease that on tomorrow’s episode, Friday, May 6, Finn and Carly dig into the kidney mystery while Sonny and Jason have a tense encounter. Expect Carlos to issue threats to Paul and a daring jail break is conceived. Here’s what you’ll see on the next GH episode.

Carly Corinthos (Laura Wright) proudly shows off the documents she pilfered from Dr Obrecht’s (Kathleen Gati) computer and she and Hamilton Finn (Michael Easton) take a look at which staff members were working the day Josslyn Jacks (Eden McCoy) got her new kidney. What will they find?

Later, Carly goes to Sonny Corinthos’ (Maurice Benard) office in time to take the tension out of a terse encounter between her husband and Jason Morgan (Billy Miller). What’s that about? Jason came with good news for Sonny but then the talk turns to Julian Jerome (William deVry).

Is Sonny pushing for Jason to help him deal with the rival mobster? Jason takes issue with what Sonny has to say and then Carly’s appearance stops things before they get too heated. Jason leaves on his motorcycle to go home to Sam Morgan (Kelly Monaco).

General Hospital spoilers say that puts Jason on a path that will encounter tragedy. This starts at the PCPD with Carlos Rivera (Jeffrey V Parise) threatening to rat out Paul Hornsby (Richard Burgi) if he doesn’t help him get out of jail and out of Port Chuck.

Carly pleads with Sonny not to do anything drastic, but is it too late? Does Sonny have a plan that may conflict with Paul’s plan for Carlos? Is Sonny making a move to take out both Carlos and Julian since he sees the court system has failed them? 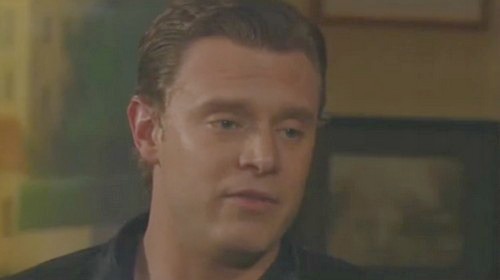 Alexis Davis (Nancy L Grahn) also has Julian on her mind and wonders if he looked in her briefcase and got the info needed to whack Hale the witness. He swore that he didn’t do it, but Alexis isn’t so sure – GH spoilers tease she might get proof that he was prying…

Carlos is scared of Sonny’s death threats and makes demands. Paul hatches a plan that will be a win-win for Carlos and him. Nathan West (Ryan Paevey) and Maxie Jones (Kirsten Storms) need to talk but things have to wait because he’s got to deal with Carlos.

Dante Falconeri (Dominic Zamprogna) and Lulu Spencer (Emme Rylan) make some life-changing plans and then he’s also due at the PCPD for an event that will become the Friday cliffhanger moment. Nathan and Dante load Carlos up to transport the prisoner out of the PCPD. 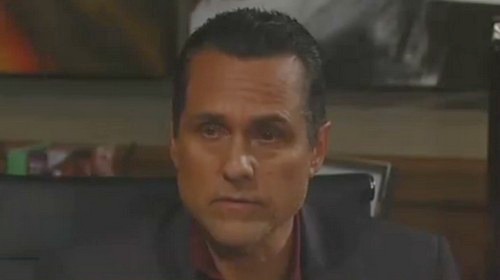 That puts them on the road at the same time and heading towards Jason. Looks like Paul may have set up a plan on the road to allow Carlos to make a break for it. Look for a crash but then it will be next week’s episode Monday, May 9 before we find out what happened, who was hurt, and how things shake out.

Dr Andre Maddox (Anthony Montgomery) and Jordan Ashford (Vinessa Antoine) enjoy some intimate alone time but Jordan has other things on her mind besides her handsome lover. Is Jordan distracted thinking about the dead witness – or is Anna Devane (Finola Hughes) the one on her mind?

All this and more on tomorrow’s GH episode, Friday, May 6. Be sure to watch the ABC soap then come back to CDL often for more “General Hospital” spoilers and news.