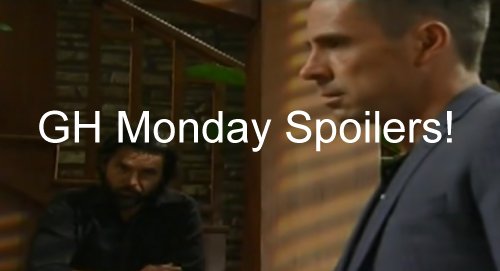 General Hospital (GH) spoilers for the Monday, June 27 episode reveal that Sabrina’s baby is in crisis, Alexis and Julian square off against each other, ghost Carlos won’t go away, and Sam is stunned by news of her mom’s arrest.

At GH, Hamilton Finn (Michael Easton) is breaking all the rules by examining baby Eduardo but he knows something is wrong with the tyke and won’t let Sabrina Santiago (Teresa Castillo) down. The problem is, he has no privileges and shouldn’t be there.

Finn could lose his medical license over this stunt. As Tracy Quartermaine (Jane Elliot) and Michael Quartermaine (Chad Duell) pace the floor, Monica Quartermaine (Leslie Charleson) comes upon them and is surprised. 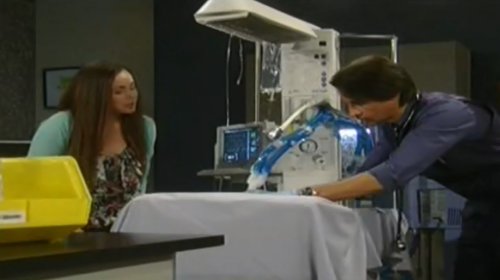 Last she saw Tracy she was on the couch at home. Monica asks why they’re in the pediatric ward and Tracy wants to buy time so Finn can take care of Eduardo. Tracy stages a diversion of some sort to keep Monica from figuring out what’s going on.

Of course, it will all come out when Finn makes a disturbing diagnosis about Eduardo’s condition. What’s wrong with the baby? Will he be okay? Let’s hope Sabrina can take the baby home since GH isn’t exactly safe these days.

In other Sabrina news, her dead husband Carlos Rivera (Jeffrey Parise) is haunting Julian Jerome (William deVry) and telling him that he needs to kill Alexis Davis (Nancy Grahn). Meanwhile Alexis is scheming to take down Julian. 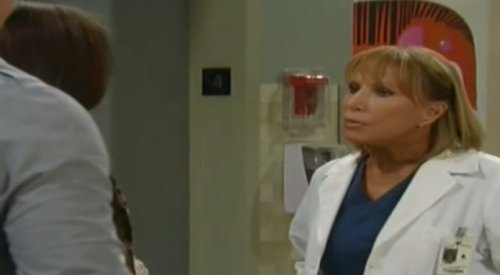 How bad will things get between these two? General Hospital spoilers reveal that Julian may run the scenario in his mind of trying to kill Alexis – so if anything looks murderous, it might just be him in his head considering it. We’ll see if they try to fool us.

Sam Morgan (Kelly Monaco) sees the news that Alexis was arrested and shares it with Jason Morgan (Billy Miller) and Sam wonders how this has affected her parents lives. However, Sam needs to stay put in London.

Sam and Jason have a mission in England to keep Jason out of jail and need to focus on that, but Sam is still concerned about her folks back home. In the shed where Ava Jerome (Maura West) and Nikolas Cassadine (Nick Stabile) hid, they wake. 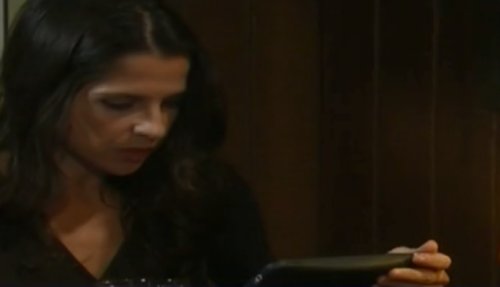 Did the boozing get the better of them because Nikolas has his shirt off and Ava looks confused? If Ava had shed sex with Nik, that’s still better than her crypt sex with Sonny Corinthos (Maurice Benard), but will she get pregnant again?

Ava and Nikolas need to get their heads on straight because Huxley Lynch (Trent Dawson) will be coming after them and need to get away. General Hospital spoilers tease that Ava does something so horrible that it shocks her.

Is this about the sexy shed time or does she do something else? And how bad is something that it horrifies Ava Jerome? Will the two get away before Sam and Jason, with Huxley’s assistance, go looking for them? 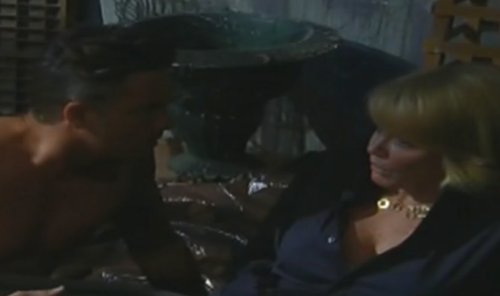 All this and more on the GH Monday, June 27 episode. Watch and then come back to CDL often for more General Hospital spoilers and news.