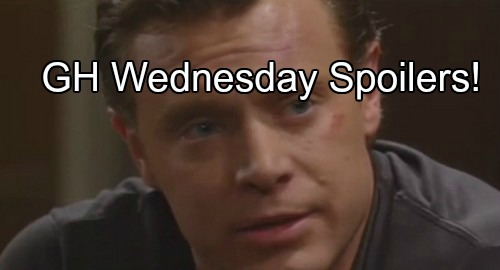 “General Hospital” (GH) spoilers reveal on tomorrow’s episode, Wednesday, May 18, that Michael tries desperately to find Sabrina. Laura has to delve into some painful memories to get answers she needs – plus Nikolas is floored by what Diane tells him and Hayden goes begging.

Nikolas Cassadine (Tyler Christopher) is determined to make Hayden Barnes’ (Rebecca Budig) life miserable, but General Hospital spoilers warn that the Prince will be hit by instant karma when Diane Miller (Carolyn Hennesy) comes to tell him that he owes the IRS big bucks.

Turns out that funding evil research is NOT tax deductible… How much does Nikolas owe? If the prenuptial agreement can be enforced, he’ll owe Hayden Barnes (Rebecca Budig) $5 million and now it looks like he really can’t afford to pay up.

Hayden is down in the dumps and facing bad news herself and she goes over to the Q mansion to see if Tracy Quartermaine (Jane Elliot) can or will help her out. Will Tracy have mercy on her former partner in espionage or laugh in her face? 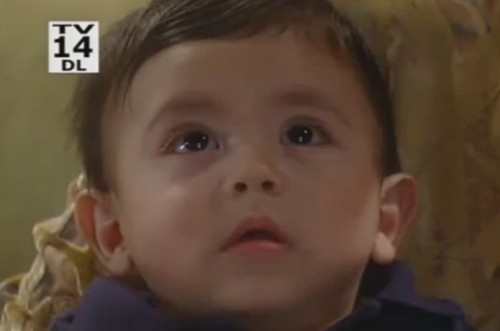 Tracy said she’s changed since her recent brush with death, but has she really? GH spoilers promise that Ned Ashton (Wally Kurth) will be surprised by something his mother does – but does that have to do with Hayden, the mystery baby in the house – or both?

Felix DuBois (Marc Samuel) comes looking for a reluctant Hamilton Finn (Michael Easton). Let’s hope Felix isn’t trying to hit Finn up to dance with the Magic Wands – he doesn’t seem the type. Felix needs something from Finn and, in turn, Felix may help Finn out.

Finn is facing more drama from Dr Obrecht (Kathleen Gati) who is determined to take him down, so he needs all the GH allies he can muster. Jason Morgan (Billy Miller) shares with Sonny Corinthos (Maurice Benard) that his memory is fully restored.

Sonny will be thrilled but will the mobster assume that means Jason will come back to work for him? If Sonny had any notions like that, Jason will immediately dissuade him and make it clear that he may know his past but has also learned lessons from it.

Jason wants something from Sonny – but what will he ask of his former partner in crime? Over at the dormant disco, Laura Spencer (Genie Francis) takes an uncomfortable stroll down memory lane and brings Kevin Collins (Jon Lindström) along for the ride.

Laura talks to Kevin about her regrets. How much does Kevin know about the unfortunate circumstances of Laura’s past and how she and Luke Spencer (Anthony Geary) first got together? Some GH spoilers tease Luke coming back for a short arc, so he might tie into this.

Will Kevin and Laura find another message or clue from Helena Cassadine (Constance Towers) at the disco? Or was that just to jog Laura’s memories? Let’s hope this Helena mystery picks up some momentum soon!

Over at the Q house, Michael Quartermaine (Chad Duell) is certain that it’s Sabrina Santiago’s (Teresa Castillo) baby because it looks like the pic he saw and the kid has the same rattle he saw at her aunt’s house. But did Sabrina drop the baby off for safekeeping?

Is Sabrina in town but worried about her safety because Carlos Rivera (Jeffrey V Parise) was just murdered and wants to make sure it’s safe for her and the baby to come out of hiding? More on this soon.

Share your comments below on the May sweeps action on GH. And be sure to check back with CDL every day for more “General Hospital” spoilers and news.