“General Hospital” (GH) spoilers reveal that Carly and Franco have an unpleasant run in on tomorrow’s episode, Tuesday, April 12 and Sonny is certain death is coming for him. Carlos has Sonny at gunpoint ready to assassinate the Corinthos mob boss. Check out what’s coming on tomorrow’s GH.

Seems like Carlos Rivera (Jeffrey V Parise) has no respect for hallowed ground or garments of the church because he’s doing priest cosplay and ready to murder Sonny Corinthos (Maurice Benard) right there in the sanctuary.

Carlos tells Sonny when he finishes his prayer and gets to amen, he’s putting a bullet in his head. Sonny needs his partner in crime Anna Devane (Finola Hughes). Too bad Anna is still trapped on the plane thanks to Paul Hornsby’s (Richard Burgi) warrant.

Paul’s not upset that Anna tied him up – in fact, he may have liked it – but he wants Sonny and Carlos to face off and one or both of them to turn up dead since that benefits him. Now that Anna realizes that, she pleads with the local cops to let her intervene so no one gets hurt.

Will Anna be the one to save Sonny’s skin? Or will he somehow be able to fight Carlos off? GH spoilers tell us shots ring out but Sonny and Anna will survive. Meanwhile back in Port Chuck, Jordan Ashford (Vinessa Antoine) finds dirty DA Paul at Anna’s house and wants to know why he’s there. 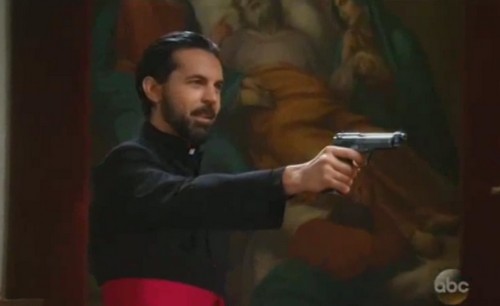 Will Paul try and pass off some lame story about watering her plants? We know he’s not going to tell Jordan the whole truth because that would make him look bad. General Hospital spoilers say it looks like Paul will cover for Anna and tell Jordan a false tale that the PCPD chief doesn’t really believe.

Speaking of cops, Lulu Spencer (Emme Rylan) runs into someone in the park. Is that leggy brunette her husband Dante Falconeri (Dominic Zamprogna) in disguise? Could Dante be working a purse snatching case? Hmm…

Out at Wyndemere, Nikolas Cassadine (Tyler Christopher) has to face the music. There’s a notary on the way to witness him signing the forms Hayden Barnes (Rebecca Budig) left with him but then Jason Morgan (Billy Miller) and Sam Morgan (Kelly Monaco) issue a threat.

Jason wants to buy the ELQ shares off Nikolas so he doesn’t leave empty-handed since Sam is still worried about Spencer Cassadine (Nicolas Bechtel). But what can Nikolas do? He can’t satisfy both the blackmail demands and both are threatening him with jail.

Over at GH, Carly Corinthos (Laura Wright) and Franco (Roger Howarth) run into each other and, as usual, she’s not happy to see her former fiancé. Carly says Franco is the “last person” she needs to see right now. Will Carly reveal she’s upset with Sonny?

If so, no doubt Franco will salt the wound and remind her she knew what she was getting when she chose Sonny yet again. Also, Carly will soon have a very meaningful encounter with Dr Hamilton Finn (Michael Easton).

General Hospital spoilers say that Carly is frustrated that Sonny bolted out of town without telling her and will be more hurt that he’s sharing things with Anna that he adamantly refuses to share with her. When Finn needs her to help him, that means a lot to Carly.

While Nikolas swears to Sam that he won’t forgive her for coming at him like this, Hayden is ready to celebrate over at the MetroCourt with Curtis Ashford (Donnell Turner). Hayden shares with Curtis that she made Nikolas an ultimatum he can’t turn down.

But is Hayden popping the cork on the champagne too soon? Will Jason’s interference prevent Nikolas from signing the documents? Also, Curtis may get dumped by Valerie Spencer (Brytni Sarpy) who has reason to doubt whether she should keep seeing her new man.

Also, what does Maxie Jones (Kirsten Storms) find when she researches Nathan West’s (Ryan Paevey) ex Claudette West? Whatever it is, it will not ease Maxie’s mind and might things much worse. We can’t wait to find out!

Don’t miss a moment of the GH episode on Tuesday April 12 – then check back with CDL for more “General Hospital” spoilers and news.