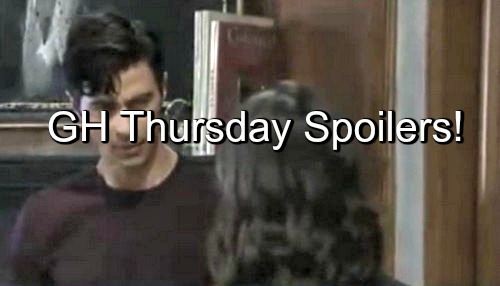 “General Hospital” (GH) spoilers indicate that on tomorrow’s episode, Thursday, May 5, Kristina has something to tell her dad on while Sonny delivers a death threat to Carlos, Griffin opens up to Anna, and Alexis and Julian have a face off at home. Here’s what to expect on GH tomorrow.

Anna Devane (Finola Hughes) and Griffin Munro (Matt Cohen) hang out at her place and Anna tells him that the case against Carlos Rivera (Jeffrey V Parise) is crumbling. General Hospital spoilers say that Anna shares her suspicions that both Alexis Davis (Nancy L Grahn) and Julian Jerome (William deVry) are bad guys.

Anna tells Griffin about Hale’s OD death and that she suspects them both. Griffin agrees that Julian is a likely perpetrator but he’s not so sure about Alexis. Anna is however and some GH spoilers tease that Alexis might face more legal trouble because she was the one who found Hale.

Also, Griffin opens up to Anna about some of his history. Will we find out more about his bullet scar and will Nathan West (Ryan Paevey) poke into the story at the PCPD? Is Nathan the one who shot Griffin and didn’t know who his victim was?

Sonny Corinthos (Maurice Benard) is also frustrated with the case falling apart. He promised Anna he’d let the justice system run its course, but since it’s not working, he decides to make a move. Sonny goes to see Carlos at the PCPD holding cells and tells him he’s a dead man.

Carlos is clearly scared – and he should be. Sonny is done waiting on the courts to make him pay for shooting Duke. Sonny also gets some time with Kristina Corinthos (Lexi Ainsworth) and she’s got something to tell him.

Will Kristina tell him about her new guy Aaron (John DeLuca) or will she reveal her past with Parker Forsyth (Ashley Jones)? Or is this just about work stuff? What does Kristina have to say to her dad? Is he too busy plotting Carlos’ death to give her the time she needs?

Dr Hamilton Finn (Michael Easton) is surprised to see Carly Corinthos (Laura Wright) looking for him at the hospital and she asks him to help her get answers about the kidney that ended up in Josslyn Jacks (Eden McCoy).

Finn still doesn’t think Carly will like what she finds but he agrees to help. This will land Carly and Finn in front of Liesl Obrecht (Kathleen Gati) who is now the queen of the records room. Dr O won’t help them, though, and they’ll have to work around her.

Alexis and Julian have a talk once they get back from the PCPD and Alexis demands that Julian come clean once and for all on whether he had anything to do with Hale’s overdose. What can Julian say to make this better? Clearly Alexis is certain that he did it.

All this and more on the Thursday May 5 episode of GH. Watch then come back to CDL for detailed daily “General Hospital” spoilers plus news and more!