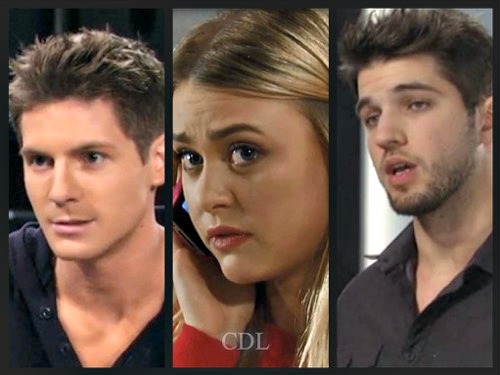 “General Hospital” (GH) spoilers tease that Kiki Jerome (Hayley Erin) will soon be tangled between two hot guys – Dillon Quartermaine (Robert P Watkins) and Morgan Corinthos (Bryan Craig). But who is best for Kiki? Who do you want to see her with? Read then vote in the CDL General Hospital spoilers POLL.

Kiki seems to always be in a love triangle, some shadier than others. First it was brothers Michael Quartermaine (Chad Duell) and Morgan. There was the sneaky marriage and supposed cousin conundrum.

Then when that was resolved, things got messier with Morgan at the center of the triangle and Kiki and her mom Ava Jerome (Maura West) both involved with him. Then it turned to a horrid quadrangle with Sonny Corinthos (Maurice Benard) thrown in.

All of this begs the question of why Kiki would give Morgan the time of day ever again. Either she’s in love or clueless. Maybe it’s a little of both. Dillon and Kiki have killer chemistry and he’s got a lot less baggage than Morgan.

Yet, according to “General Hospital” spoilers, Kiki will struggle to cut ties with Morgan and will be drawn to him despite her pull to Dillon. Morgan did the humane thing by cutting her loose after Ava appealed to him to let Kiki go.

But once Morgan is out of the Freedman Clinic, he’ll struggle with jealousy over Kiki’s blossoming romance with Dillon and make himself an obstacle to their new relationship. Is Morgan wrong to keep trying to get with Kiki?

Dillon may not take this well. After all, he just had that bad deal with Lulu Spencer (Emme Rylan) who spurned him and went back to Dante Falconeri (Dominic Zamprogna). Dillon doesn’t want more ex drama after that.

Could Morgan meddling with Kiki cause Dillon to walk away? Or will Dillon stand up and fight for their new romance? Will Kiki be pulled back into her dark coupling with Morgan – or choose the new and simpler romance that Dillon offers?

Hmm. Choosing the son of a mobster or the son of one of the most powerful and envied families in Port Charles should be an easy choice – but Kiki doesn’t always choose wisely. That’s how she ended up shot and in a coma, remember?

But what do you think GH fans? Would you rather see Kiki with Dillon or Morgan? Vote in the CDL POLL and share your comments below. Plus come back to CDL often for more “General Hospital” spoilers and news.