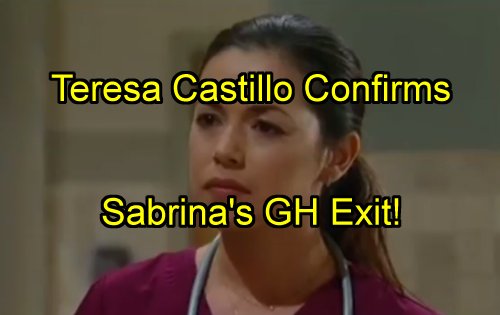 New General Hospital (GH) spoilers straight from Teresa Castillo’s Twitter account reveal that Sabrina Santiago may be on her way out of GH in a body bag. Did Sabrina’s portrayer just reveal that she’s GH killer Paul Hornsby’s (Richard Burgi) next victim?

This morning, Teresa Castillo’s Twitter profile listed her bio with this: “Give. Love. Currently playing Sabrina Santiago on ABC’s General Hospital.” Hours later, the latter half had been deleted and it was down to “Give. Love.”

Looks like social media confirmation that Castillo is no longer playing the part – and that means just one thing – nurse Sabrina is dead at the hands of GH serial killer and dirty DA Paul. On the Tuesday, September 13 episode, Sabrina ends up where she should not be.

Elizabeth Webber (Rebecca Herbst) is out of surgery and sends Sabrina on an errand as her first day back as a GH nurse. Shockingly, it seems like Sabrina may soon regret her decision toReturn to GH over Michael Quartermaine’s (Chad Duell) protests.

Sabrina already has her radar on high alert about Paul after she eavesdropped on him talking with Ava Jerome (Maura West). Paul has his eye on another target, though, not Sabrina – at least at first. Paul makes a call on Tuesday and says he has one more person on his list.

That person is Chief of Staff Monica Quartermaine (Leslie Charleson). General Hospital spoilers reveal that someone interferes with Paul’s repeated attempt to kill Monica and other spoilers say that Sabrina will “save the day” when she’s out doing Liz a favor.

We also know that GH killer Paul will take another life this week when he can’t kill Monica because of interference. If Sabrina catches Paul where he should not be and looking shifty, she’ll confront him and start asking questions – that’s how she rolls.

This could force Paul to make a choice between taking a life he didn’t intend to – or facing exposure as the GH serial killer. We know he won’t let that happen and Sabrina could pay for her interference with her life.

Then again… GH showrunners are known to leak spoilers that are red herrings. They have done this before with the killer case to make fans think someone important would die but it turned out GH fans are punked and it was a “nobody” that died. 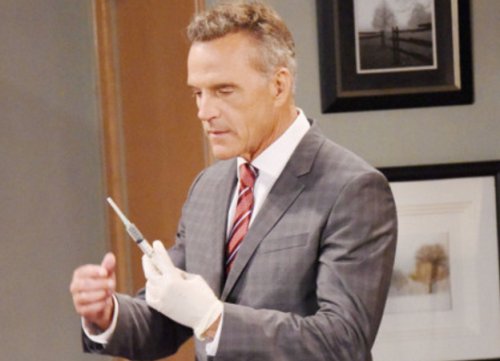 We have to take it with a grain of salt that GH honchos could have asked Teresa Castillo to change her bio to lead us off track and it’s someone else entirely that Paul will kill. All that aside, it sure looks like Sabrina is on her way out of GH and Castillo confirmed it via Twitter.

What makes all this worse is that Michael will break the news to Felix DuBois (Marc Samuel) that he’s going to propose to Sabrina and shows him the ring. The impending proposal and Sabrina’s long awaited happiness with Michael and baby Teddy make the notion of her death even sadder.

What do you think GH fans? We’ve been promised a major character death of someone “beloved” and Sabrina fits the bill. We knew they weren’t going to lay out a legacy character like Monica or Carly, but Sabrina is a good option to off a named character without ruining major plotlines. 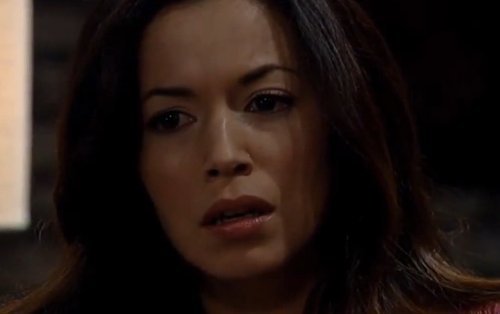 Share your comments below on Sabrina’s impending demise, Teresa Castillo’s social media change of status, and what you hope from the GH killer plot. Be sure to check back with CDL often for all the latest General Hospital spoilers and news.