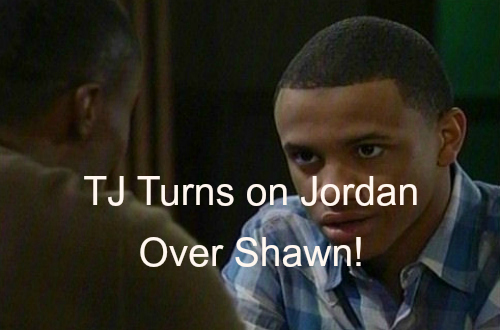 General Hospital (GH) spoilers reveal that TJ Ashford (Tequan Richmond) is still reeling from learning that Jordan Ashford (Vinessa Antoine) has been lying to him his whole life about his father. There’s a confrontation coming and Jordan might lose her son for good.

Remember Curtis Ashford (Donnell Turner) brought up the fact that he knows Shawn Butler (Sean Blakemore) is TJ’s biological father when trying to make amends with Jordan. Unfortunately, TJ had dropped by the PCPD and overheard the whole thing.

General Hospital spoilers reveal that in coming days, TJ will come to talk to Jordan without revealing that he knows the truth, to try and get her to do the right thing and come clean. Jordan won’t. She will keep on lying which is the worst thing to do.

You might also recall that Jordan never told Shawn the truth until right before he was sent to Pentonville. That was a stunner and now he’s doing hard time for a crime he didn’t commit – shooting Hayden Barnes (Rebecca Budig).

For Shawn to learn he has a son and that he will spend a great many years away from him was a tear jerking moment. TJ will be hit hard by the realization that not only is Shawn his dad, but that he’s stuck in Pentonville and can’t be with him.

That leaves TJ with one man in his life to turn to – Curtis. After Jordan lies to TJ yet again, TJ will get closer to his uncle – who technically is not his uncle at all since this paternity revelation means they share no blood tie.

That doesn’t matter to Curtis, though, since he’s known for a long time that TJ was not his nephew by blood, but loved him anyway. TJ will confront Jordan about her long-kept lie and things will get explosive between them. 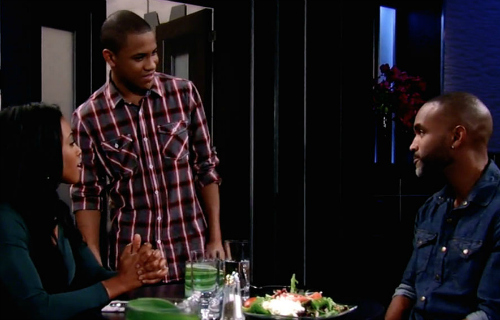 Things already hit a rough patch between Jordan and TJ when he decided to move in with Sonny Corinthos (Maurice Benard), but they might be done for good over this whopper of a lie she’s told him his entire life. Can TJ forgive her?

General Hospital spoilers reveal that TJ and Curtis will get much closer in coming weeks as the chasm widens between TJ and his mom. Will TJ move in with Curtis so he can have a man in his life? How long before TJ heads to Pentonville to see Shawn?

The bummer is that even though Shawn is a criminal, he’s in jail for a crime he didn’t commit. And Hayden knows it and now that Nikolas Cassadine (Nick Stabile) is presumed dead, there’s no reason for her not to come forward and exonerate him for her shooting.

Why have the GH writers left Shawn rotting in jail so long? Perhaps it was for this moment. Will Shawn be released soon and we’ll have a bittersweet father and son reunion? Those two have been kept apart for far too long.

GH fans will be aching for the scene where TJ comes to Shawn to admit that he knows he’s his father and the two can finally be father and son for real. They already had a parent-child relationship since Shawn was pretty much raising him while Jordan was undercover.

And now it’s clear why Jordan left TJ with Shawn – she was leaving him with his father even though neither knew that’s what she was doing. Despite this, Jordan still robbed TJ and Shawn of nearly two decades of knowing each other as father and son.

That seems unforgivable. What do you think? Share your comments below on the coming rift between TJ and Jordan and whose side you’re on. And come back to CDL often for more General Hospital spoilers and news.