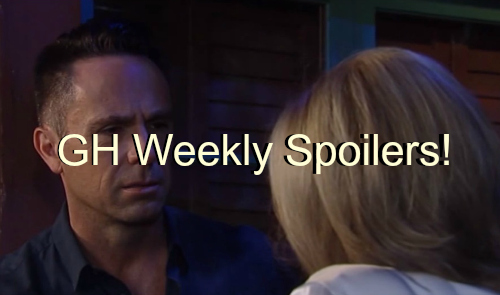 “General Hospital” (GH) spoilers reveal in episodes the week of Monday, June 13, to Friday, June 17, that Nathan slaps cuffs on a stunned Alexis, Julian packs his bags and turns to Nina while Jordan explodes with jealousy and Carly finds out a kidney truth that floors Liz.

The week ends with Nathan West (Ryan Paevey) making a shocking arrest in the Carlos Rivera (Jeffrey Parise) murder case. Looks like it’s Alexis Davis (Nancy Grahn) who will land in the PCPD lockup, but why Alexis and not Julian Jerome (William deVry)?

The week kicks off with Alexis furious that Julian barbecued the bloody shirt and she knows the Cassadine dagger murder weapon is the only way to make her murderous hubby pay. GH spoilers hint that Alexis will get word to the PCPD about the evidence.

As Lucas Jones (Ryan Carnes) and Brad Cooper (Parry Shen) are set to marry, the cops will interrupt the festivities to search for the knife. This is too much for Julian who will pack his bags and move out and then turns to Nina Clay (Michelle Stafford).

However, things take a turn when the forensics testing on the Cassadine dagger reveal unexpected results and a warrant is sworn out – but it’s not the arrest anyone is expecting. Julian makes haste to cover his tracks for the crime!

Nina is ready to alibi Julian and it looks like these two will heat up soon because Julian is furious at Alexis’ betrayal while Nina stands by him. Sonny Corinthos (Maurice Benard) and Carly Corinthos (Laura Wright) both confront Alexis this week about Julian.

Olivia Falconeri (Lisa LoCicero) catches Julian and Nina in what looks like a compromising position this week and we have to wonder how Julian resuming a life of crime will affect his co-parenting relationship with baby mama Olivia.

Sonny goes to the PCPD to talk to Anna Devane (Finola Hughes) and Paul Hornsby (Richard Burgi) about making Julian pay. Anna later tries to work a deal with Paul, but things may get ugly between those two if she keeps spurning his advances.

Also keeping an eye on Anna is Andre Maddox (Anthony Montgomery). When Jordan Ashford (Vinessa Antoine) comes at Andre about his feelings for Anna, he drops the “L” word on Jordan but then later tells Anna he digs her too so he can’t hang around her anymore.

Ava Jerome (Maura West) skips town after giving her brother a warning about the cops and she runs into someone familiar. Other spoilers tease that new Brit in town Huxley (Trent Dawson) shows up mid-week and has a story arc involving Ava.

Jason Morgan (Billy Miller) gets help this week on the Nikolas Cassadine (Tyler Christopher) investigation from Sonny and Damian Spinelli (Bradford Anderson) but it’s Sam Morgan (Kelly Monaco) that he’s most impressed with – she digs up major clues!

Spinelli may also dig up some dirt on Claudette (Bree Williamson) and Nathan. Maxie Jones (Kirsten Storms) thinks she needs to put the brakes on with the detective and not rush to get married. Maxie and Nathan both make Griffin Munro (Matt Cohen) uncomfortable.

Griffin is the only one of the three that knows the whole story and he’s miserable that he was the shooting victim but both are trying to confess their sins to him. Griffin tells Maxie about an incident in his past, but how long until his tie with Nathan comes out?

Sonny make a nice gesture to help Lulu Spencer (Emme Rylan) and Dante Falconeri (Dominic Zamprogna) out. Will Sonny buy them a house to make room for the larger family they’re planning? Dante and Lulu’s plans will be derailed soon.

Kevin Collins (Jon Lindström) gets a clue on the Helena mystery and he and Laura Spencer (Genie Francis) will head out of town soon followed by Lulu and Dante. Valerie Spencer (Brytni Sarpy) graduates and is an official PCPD cop which makes Curtis Ashford (Donnell Turner) nostalgic.

Valerie will soon be part of the GH serial killer investigation. Over at General Hospital, Dr Obrecht (Kathleen Gati) finds evidence that implicates Hamilton Finn (Michael Easton) and things get worse for the lizard-loving doc when he refuses to answer Monica Quartermaine’s (Leslie Charleson) questions.

Monica takes steps with Finn that displease Tracy Quartermaine (Jane Elliot). Finn’s health takes a serious decline next week and someone surprising helps him when he seems to hit rock bottom. Is this more assistance from Hayden Barnes (Rebecca Budig)?

Carly makes some progress in her investigation into the Josslyn Jacks (Eden McCoy) kidney mystery and gives Liz Webber (Rebecca Herbst) an update on her progress. Liz will be deeply upset by this and Franco (Roger Howarth) steps up to comfort Liz.

Also this week, TJ Ashford (Tequan Richmond) is back and hears something about his mom that he won’t like. TJ spends more time with Curtis and also Molly Lansing (Haley Pullos) who tells TJ about her plans for her future.

There’s so much happening next week on General Hospital! Don’t miss a moment of the GH episodes the week of Monday, June 13 through Friday, June 17. Watch then check back with CDL every day for detailed “General Hospital” spoilers and news.