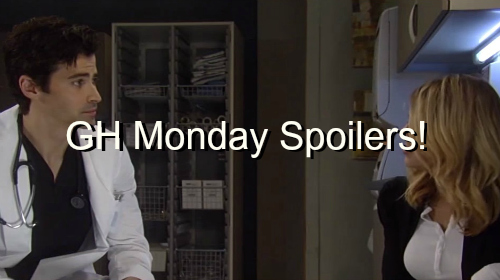 “General Hospital” (GH) spoilers for next week’s episode on Monday, June 13 reveal that conflict gets bitter at the Jerome house as wedding guests show up while Julian gives a warning and Sam and Jason figure out who they can trust – and who they can’t.

Check out these General Hospital spoilers for the next GH episode. The Friday, June 10 episode will be a rerun due to the Muhammed Ali funeral which cuts into GH’s time slot. Nathan Varni said this “is an important episode” so they are moving it to Monday.

Dante Falconeri (Dominic Zamprogna) had a PCPD cop follow Sam Morgan (Kelly Monaco) but did she lose her tail before she got back to Sonny Corinthos’ (Maurice Benard) safe house to meet Jason Morgan (Billy Miller)?

Sam hopes that Jason found something to prove Nikolas Cassadine (Tyler Christopher) is alive. He did! Dante may also have Damian Spinelli (Bradford Anderson) followed hoping to track down Jason so he can arrest him.

Sonny and Spinelli both dig in to the Nikolas mystery and The Jackal finds something big. Julian Jerome (William deVry) is hardening his heart because he realizes Alexis Davis (Nancy Grahn) is dead-set on betraying him.

Julian now has to protect himself and those he knows would never turn on him – starting with Ava Jerome (Maura West). Julian has to figure out what to do next based on Alexis’ actions.

Julian’s ride-or-die sister shows up to warn him that the Carlos Rivera (Jeffrey Parise) investigation is focusing on him – which he already knew. Julian wants Ava to leave town so she doesn’t become collateral damage in his battle to save himself.

Also at risk because of Julian’s mob mess is Lucas Jones’ (Ryan Carnes) wedding. Julian didn’t want to show at the MetroCourt Nurses Ball wedding because of all this – but then it all ends up on his doorstep.

As Lucas and Brad Cooper (Parry Shen) prepare to say “I do” things go awry. Carly Corinthos (Laura Wright) lectures Alexis on covering for Julian and this might be the last straw that gets Alexis to turn on her husband.

Alexis wants to make sure Julian doesn’t get the chance to destroy the murder weapon too and will call the cops. Looks like the wedding will be interrupted by PCPD detectives there to “search” for the murder weapon.

Spoilers also reveal there’s no arrest yet – just the drop-by to grab the dagger. Once that happens, Julian knows Alexis crossed the line and she may have killed Julexis as surely as he killed Carlos!

Later on next week’s episodes, Julian will turn to another woman – Nina Clay (Michelle Stafford) who will do for him what his wife won’t. Griffin Munro (Matt Cohen) will continue to be frustrated at keeping Nathan West’s (Ryan Paevey) secret.

Maxie Jones (Kirsten Storms) and Nathan seem to see Griffin as their personal priest and confessor. Will Griffin snap and reveal his connection to Nathan? Also at GH, Monica Quartermaine (Leslie Charleson) has to take action.

The new Chief of Staff can’t ignore what seems like mounting evidence against Hamilton Finn (Michael Easton) and needs to ask him some difficult questions. How will Finn respond to being grilled?

Hayden Barnes (Rebecca Budig) is terrified of being arrested for one crime she did commit and another she didn’t. She knows she could face jail time over the diamonds but then Naomi Dreyfus (Robin Riker) promises to help her daughter.

But Hayden suspects her mother’s motives aren’t sincere and wonders what her mother helping her will cost. Hayden also begins to wonder about her mother’s strange and persistent interest in Liz Webber (Rebecca Herbst).

Don’t miss the action on the new Monday, June 13 episode and check back with CDL for week-ahead “General Hospital” spoilers, news and more!