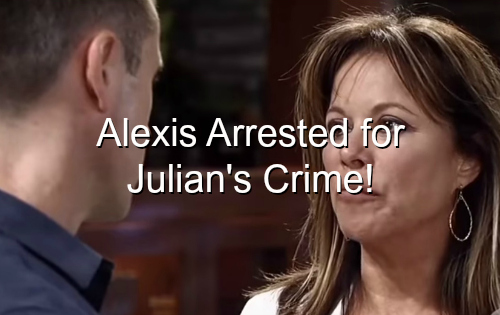 ‘General Hospital’ (GH) spoilers tease that Alexis Davis (Nancy Grahn) will be so eager to punish her husband for murdering Carlos Rivera (Jeffrey Parise) that she messes up and may get herself arrested for the crime instead.

Now that Julian Jerome (William deVry) destroyed the bloody shirt in an impromptu barbecue, Alexis is furious and desperate but she’s got the murder weapon. GH spoilers know that Alexis was ready to take the weapon but decided to wait for Julian to leave.

If Alexis had the chance, she could grab up the dagger and scoot down to the PCPD and hand it off to Jordan Ashford (Vinessa Antoine) but there’s a problem – Julian sprung a last-minute wedding on Alexis and now she’s stuck at the house.

Things get stickier when Carly Corinthos (Laura Wright) shows up and lays into Alexis for shielding Julian (as if Carly has room to talk). It doesn’t look like Alexis will have time to get to the PCPD without anyone noticing she’s gone.

When Alexis realizes she can’t get away, General Hospital spoiler say she’ll worry Julian will get suspicious and destroy the dagger. She may panic and call the PCPD to report that the murder weapon is in their house. But will Alexis do it as an anonymous tip?

Lucas Jones (Ryan Carnes) and Brad Cooper (Parry Shen) are set to get married now that Lucas has recovered but GH spoilers hint their festivities will be interrupted. Will the PCPD come knocking and derail the wedding?

Other spoilers reveal that the Cassadine dagger is in the hands of the PCPD next week and will undergo testing. The only way for that to happen is for Alexis to hand it over or call in a tip for the cops to come get it – which might be the safer route for her.

But here’s the problem. The dagger likely won’t implicate Julian in the Carlos killing, but Alexis! The lady lawyer may have not thought this through before she decided to use the deadly dagger to nail her mob hubby for the Carlos killing.

You’ll recall that Julian thoroughly wiped down the dagger with the hankie that he then burned after a horrified Alexis dug it out of his jacket pocket. But wiping down a murder weapon will not get rid of DNA evidence from a stabbing.

Julian would have had to soak that bad boy in bleach to get rid of the blood trace (hasn’t he watched CSI: Port Charles?). But what the wiping should have done is get rid of Julian’s fingerprints. That’s good for him – bad for Alexis.

After Alexis realized that her dagger might have been used to kill Carlos, she pulled it out of the cabinet and handled it. What was she thinking? She’s a criminal lawyer! She should never have touched a suspected murder weapon.

When the PCPD tests the dagger, they should find evidence of Carlos’ blood and DNA plus Alexis’ fingerprints. GH spoilers tease that Nathan West (Ryan Paevey) makes a surprise arrest next Friday – will he come knocking at Casa Jerome?

If the detective comes to her door, Alexis may be happy to see him because she assumes he’s there to take in Julian for the Carlos killing and she’ll see her hubby held accountable for his crimes. But will Alexis end up in cuffs instead?

Could her plan to take down her husband backfire? Although Diane Miller (Carolyn Hennesy) is a great lawyer, Alexis might have a problem if this case goes to trial. After all, Alexis doesn’t have an alibi, other than Julian for the time of death.

There’s evidence that ties Alexis to the murder weapon and she had motive. DA Paul Hornsby (Richard Burgi) could make the case that Alexis wanted Carlos dead so her husband could get off scot-free for ordering Duke Lavery’s (Ian Buchanan) death.

Will Alexis wind up in an orange jumpsuit while her hubby Julian remains free to do as he pleases? Share your comments below and check back with CDL often for more “General Hospital” spoilers and news.