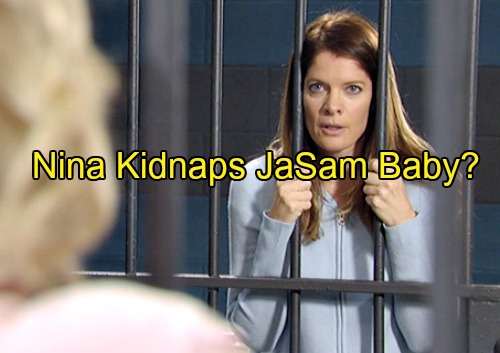 ‘General Hospital’ (GH) spoilers ask if Nina will do the unthinkable and kidnap Jason and Sam’s baby. ‘General Hospital’ spoilers tease that in the coming weeks Nina (Michelle Stafford) will begin to get more and more desperate for a baby.

GH fans saw a couple of weeks ago Nina trying to convince Curtis (Donnell Turner) to find her a child. We also found out that Sam (Kelly Monaco) is pregnant and no doubt this definitely gives Nina the perfect opportunity to have one after what her mother, Madeline (Donna Mills) put her through.

Could Nina do the unthinkable and target Sam and decide to kidnap her baby and attempt to raise her as her own? We know if this happens Sam will understandably do everything she can to get her baby back from Nina – if she finds the infant. Will Jason (Billy Miller) intervene and what will he be pushed to do?

We know recently Nina has been very determined in her quest to have a child, she attempted in vain to convince Franco (Roger Howarth)to have a child with her, which is what ultimately lead to the end of their relationship. Now that she has moved on from Franco, nothing seems to have changed, only the fact that Nina is more determined than ever to have her “own” baby.

Will Nina go to extremes? There has been some speculation on GH social media as well that Nina really does have a child and may not even realize it, one that may already be alive and well living in Port Charles.

At this point in the game General Hospital hasn’t let on as to whom that child could be but of course many Internet sources have speculated that the child is alive and well and living in Port Charles. GH rumors say that Nina’s child is either Nelle (Chloe Lanier) or Aaron (John DeLuca). In terms of both newcomers, we know very little about each of them but that could soon be explained.

Madeline, Nina’s mother has lied to Nina about so much since Nina was told her first child died, then again her mother also told her that she could have no more children, that it was impossible or at least highly unlikely since she was in menopause.

Will Nina go forward with her plan to get a baby anyway she can or will she continue to follow leads that her mystery child might be alive and well – and even living in Port Charles? Stay tuned to see how this story unfolds by watching General Hospital weekdays on ABC and come back to CDL for all your General Hospital spoilers, updates and news!