General Hospital (GH) Spoilers: 7 Port Charles People Who Deserve to Be Locked Up in Pentonville – Jason, Sonny and More! 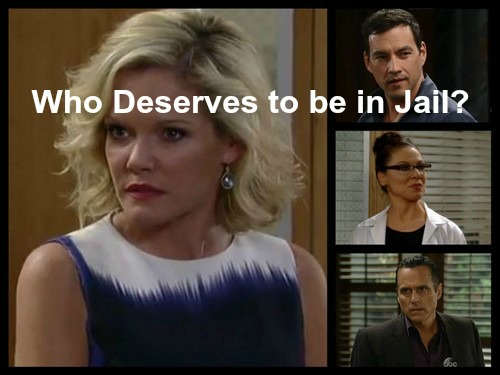 “General Hospital” (GH) spoilers hint that Shawn Butler (Sean Blakemore) may be exonerated soon and released from Pentonville. That’s one more criminal back on the streets because Shawn is guilty of plenty more offenses. With that in mind, here’s a look at seven other people who deserve to be behind bars.

#1 Sonny Corinthos
Let’s face it – Sonny Corinthos (Maurice Benard) is a criminal. Sure he’s handsome, likable, and a good dad, but he’s a cold-blooded killer. Even after the governor’s pardon for killing AJ Quartermaine, he didn’t learn his lesson. He sent Shawn to kill Jake Doe – who was actually BFF Jason Morgan (Billy Miller). Plus, he shot a mob leader in cold blood at the five families meeting. He belongs behind bars!

#2 Ava Jerome
Ava Jerome (Maura West) is a stone cold murderer. Not only did she shoot Connie Falconeri (Kelly Sullivan) but was involved in AJ’s slaying by letting him take the fall for her. She’s had Carlos Rivera (Jeffrey Vincent Parise) kill countless others, escaped from jail, and then avoided going back because Paul Hornsby (Richard Burgi) took evidence against her. Verdict: guilty! Send her back to Pentonville.

#3 Jason Morgan
Jason may be everyone’s favorite hit man, but he’s still a hit man. Since he’s been back to life, he’s committed many murders – granted they were in self-defense. And he did throw Nikolas Cassadine (Tyler Christopher) off a balcony. The bottom line is, as popular as the guy may be, he’s got a pile of dead bodies in his past (and maybe more in his future). We hate it, but he really deserves to be in jail.

#4 Nikolas Cassadine
Nikolas is a top-tier schemer and it’s been hard to watch his decline since he used to be a pretty good guy. But in recent months, he’s committed major corporate espionage by taking over ELQ through illegal means, lied about Jason’s identity, ordered a hit on Hayden Barnes (Rebecca Budig), let Shawn go to jail for his crime, and assaulted Jason. He doesn’t deserve life in jail, but he should be behind bars for a bit.

#5 Paul Hornsby
Paul is a real piece of criminal work. He put down Kyle Sloane (Robb Derringer) like a rabid dog, then used his body to help keep Carlos’ being alive hidden. He’s blackmailed Anna, shot Sonny, framed Julian Jerome (William deVry) for Sonny’s killing, and stole the evidence against Ava so he could have her out of jail and doing his bidding. He’s just a nasty piece of work – lock him up and throw away the key.

#6 Liesl Obrecht
This woman should be in jail, not running a hospital. Liesl Obrecht (Kathleen Gati) has done too many crimes to list but a few include shooting Liz Webber (Rebecca Herbst), killing Victor Cassadine (Thaao Penghlis) to protect Nathan West (Ryan Paevey), helping Olivia Falconeri (Lisa LoCicero) fake her son’s death, and countless other small and large crimes. Lock her up and don’t let her out!

#7 Johnny Zacchara
This guy is the only one on the list that the cops are actually after and want to send back to jail. Despite that, Lulu Spencer (Emme Rylan) sicced him on her cousin Valerie Spencer (Brytni Sarpi) – so maybe Lulu also deserves a turn in lock up. Johnny is a stone cold killer even though, like Jason, he’s immensely likable. But he’s still a mob boss and thug, so let’s hope he’s back in Pentonville soon.

The fact is, there aren’t many people in Port Charles with clean hands. If everyone was punished for their crimes, the city might be thinned down to just a few innocent souls. What do you think, GH fans, who else do you think needs to spend a time out behind bars for their evil deeds?

Share your thoughts in the comments section below and come back to CDL often for tons of “General Hospital” spoilers, news and more.