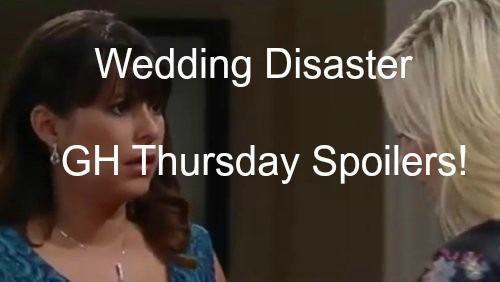 “General Hospital” (GH) spoilers reveal that the Scorpio-Drake wedding will start soon, as will a shocking lawsuit and a major mishap that could spoil Robin and Patrick’s ceremony. Check out these spoilers for the Thursday, January 7 episode of GH.

At General Hospital, Hayden Barnes (Rebecca Budig) comes to check on Nikolas Cassadine (Tyler Christopher) who looks like he’s ready to check out and head home. Hayden brings bad news. Look like Nikolas is being sued.

She hands him papers and says these were served on him – must be Tracy Quartermaine (Jane Elliot) that’s prepping to take him to court over his ELQ takeover antics. Surely Hayden can’t be suing over him having her shot – she’s much more of a blackmail girl.

Nikolas will be annoyed at the lawsuit – this may be the catalyst that has him leverage Jason Morgan (Billy Miller) to do his bidding or go to jail over the balcony tossing incident. Also at GH, we saw Franco (Roger Howarth) looking at some disturbing pics that Jake Spencer (James Nigbor) drew.

Will he take the pics to Dr Andre Maddox (Anthony Montgomery) to check out and see what’s up with the kid? Franco’s no child psychologist but he does know what crazy looks like when he sees it. Paging Dr Maddox to the Webber house – stat!

Tracy is focused on getting ELQ back into family hands but Laura Spencer (Genie Francis) chats her up and encourages her to take a moment for herself. Laura and Tracy talk about Luke Spencer (Anthony Geary) for a bit, since they were both hurt by him.

Tracy’s not ready to take a time out, she’s doubling down on her ELQ recovery efforts. She’s also got a secret about Hayden that she’s dying to use. Will Tracy tell Laura the dirt she’s got on Hayden or save it to spring on Hayden out of the blue? GH spoilers indicate it’s about Hayden’s ex…

What’s interesting here is that Tracy can use that info to leverage Hayden to help her step up the efforts to take down Nikolas and recover ELQ while Nikolas may have the same kind of leverage over a Quartermaine – Jason! Will this cause a stale mate in the power struggle?

Later, Laura chats up Nikolas and tells him to get Hayden out of his life. Even if Tracy doesn’t tell her what she found out, Laura thinks Hayden is a no-good schemer who shouldn’t be around her son and grandson. How will Nikolas react?

But it’s over at the Scorpio-Drake house that the big action is going down. The family is gearing up for the surprise nuptials. All the guests came expecting a party and found a wedding. Maxie Jones (Kirsten Storms) is helping put it all together but she messed something up.

What could it be? Did Maxie forget to schedule the preacher? Is that why Mac Scorpio (John J York) ends up doing the honors? Robin Scorpio (Kimberly McCullough) tries to calm her down and the crisis will be averted and the wedding begins – likely in the last moments of the show.

Can Carly behave for a couple of hours instead of causing a scene with Liz? Liz is thrilled for Patrick that he got Robin back but is sad that he’s leaving. That’s one less ally she has in Port Charles. Jason drops by unexpectedly and Sonny insists that he stays.

Kind of a strange feeling for Liz and Jason to be at a wedding together since the last wedding was theirs and it imploded horribly. This is the big finish for Scrubs fans as Patrick and Robin finally get their happily ever after and Emma Drake (Brooklyn Rae Silzer) finally has her family back together.

Don’t miss a moment of the Thursday, January 7 show and come back to CDL often for more “General Hospital” spoilers and news.