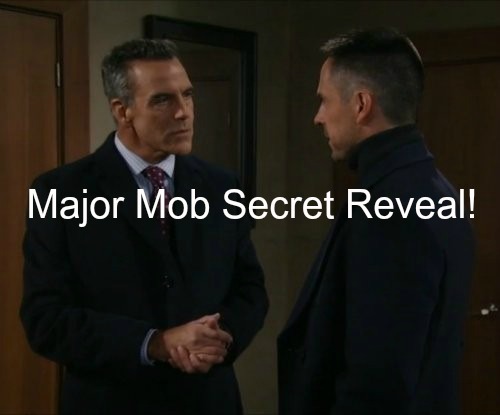 “General Hospital” (GH) spoilers have teased for months that Julian Jerome (William deVry) is not really out of the mob biz despite what he’s been telling his fiancée Alexis Davis (Nancy Lee Grahn), the PCPD, and anyone else who asks or will listen.

But are his hands as clean as he says? Could Julian be the one pulling Paul Hornsby’s (Richard Burgi) strings? Is Julian the true nemesis that Sonny Corinthos (Maurice Benard) will face in coming months rather than his sister Ava Jerome (Maura West)?

Many signs point to Julian being as mobbed up as ever. Consider these factors:

#1 You can’t get out of the mob. It’s not like a job at Target. Julian couldn’t just put in two weeks’ notice and ask for a good reference and walk away. The only way out of the mob is in a body bag.

#2 Everyone keeps bringing it up. If Julian really was out, after this many months, the subject would die down. But rather than fading out as a storyline, it’s ramping up.

#3 Julian didn’t press Ava on her involvement in what he knows are shady activities – that’s because he may have already known what the deal was and was just testing her.

#4 Carlos Rivera (Jeffrey Vincent Parise) hasn’t gone after Julian. If Julian was out, Carlos would feel free to punish him for screwing up his life. Carlos is likely still Julian’s asset.

#5 Julian isn’t scared. If he had really walked away from the mob, he would be worried about reprisals. Either his cartel – or former enemies – would take him out on principle.

#6 Paul is working with Carlos who is Julian’s guy. This shows you that the Jerome cartel is in play and still intact – and we know Ava wasn’t running it before – she was pulled in against her will.

#7 Paul orchestrated Carlos’ faked death. Why would he do that for a Jerome hit man? Simple. He was acting on orders from Julian to get Carlos out of town since he had served him faithfully.

The fact is, Paul is reporting to someone. We’ve heard Paul on the phone deferring to someone who’s in charge. We know it wasn’t Jerry Jacks (Sebastian Roche) since he’s in jail and not Helena Cassadine (Constance Towers) since she’s ostensibly deceased.

But most telling was the recent conversation between Julian and Paul at Sam Morgan’s (Kelly Monaco) penthouse. It sure sounded like Julian ordered Paul to shut down Anna Devane’s (Finola Hughes) investigation into him for the killing of Duke Lavery (Ian Buchanan).

Why would Paul assure a known former mobster that he’s not being investigated? Why would any official in power in law enforcement rush to make any promises to someone like Julian? Jordan Ashford (Vinessa Antoine) is Port Charles’ top cop and she is still looking into it.

Perhaps Paul is backing off of him because he’s Ava’s brother, but that’s not likely. Back in September, though, Ava told the cops and the Five Families that it was Carlos that shot Sonny. However, at the time, Paul told her to tell them it was Julian and he framed Julian for some of his activities.

It’s true that these incidents don’t align with Julian being in charge – however that can be attributed to a storyline and writer change. Back then, Ron Carlivati was writing and he may have had another mob boss in mind – or that could have been a red herring as part of the plot he was writing.

From the beginning of October, though, the material was from new writers Shelly Altman and Jean Passanante and we saw how they scrapped a number of plots and took others in whole new directions. The big indicator is how Paul deferred to Julian for no apparent reason recently.

Julian may have hired Paul on to be the behind-the-scenes mastermind of the Jerome organization but then decided to make Ava the figurehead when she came back because he knew she would serve the family well. That puts two layers of deniability between Julian and the mob.

Then Julian focused on making himself look like a legitimate businessperson – paying taxes and everything. He can just stash his mob money in offshore accounts and maintain the illusion of propriety. But why would Julian go to all this trouble? Love.

Julian adores Alexis and she wanted him out of the mob. He couldn’t get all the way out (because that’s a fact of mob life or because he didn’t want to) but he wanted to give Alexis the impression that he was out so he hired Paul who then leveraged Ava into the biz.

What do you think GH fans? Do you think Julian is running Paul? Is he really out of the biz or has he been lying to Alexis all along? GH spoilers indicate Julian is hiding something major from Alexis and this seems like the logical choice since the mob is a deal breaker for Alexis.

Share your thoughts in the comments below and come back to CDL often for more “General Hospital” spoilers, news and updates.