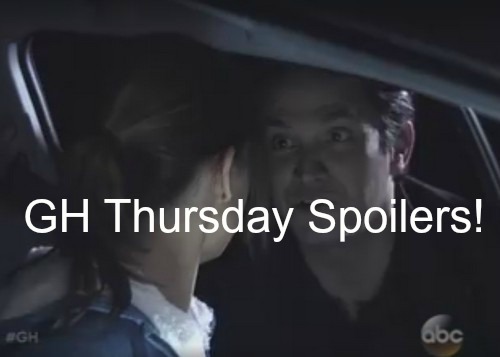 “General Hospital” (GH) spoilers hint that Valerie will be in danger thanks to Johnny and Lulu, Anna and Jordan’s plans are ruined, Maxie comes clean, and a manhunt begins in Port Charles. Check out these spoilers for the Thursday, January 14 episode.

Maxie Jones (Kirsten Storms) is over at the PCPD clearing her conscience. Maxie tells Nathan West (Ryan Paevey) that she knows for sure Johnny Zacchara (Brandon Barash) is in Port Charles. She couldn’t hide it since Nathan was already working the Johnny case.

But things get trickier when Nathan calls Dante Falconeri (Dominic Zamprogna) over and asks Maxie to tell him too. Maxie wants to protect Lulu Spencer (Emme Rylan) so she won’t want to drag her name into this, but can she avoid it?

Even if Maxie doesn’t blab Lulu’s dirty Johnny secret, Dante will know soon enough. Johnny is ready to put his long-simmering Valerie Spencer (Brytni Sarpi) revenge plan into action. He’s right where he wants to be – in the car with Val – just a manhunt is about to kick off.

Looks like Johnny might get Valerie to take him somewhere out of the way so he can do something bad to her. GH spoilers indicate Johnny will reveal that he’s not the nice guy she thought and then may stash Val somewhere that turns into a very hot spot.

But will Johnny over-talk since he’s upset about Lulu insisting she wants Dante, not him? Will Johnny reveal that he’s doing this on behalf of Lulu? Dante’s wife is going to come out of this looking bad – whatever happened to just sending photos of Val taking money from him?

Lulu meanwhile will have second thoughts about the revenge scheme, but it’s too late to call Johnny off. What prompts her change of heart? Looks like a talk with mother-in-law Olivia Falconeri (Lisa LoCicero) is responsible for Lulu rethinking things.

Olivia calls into question just how solid Lulu and Dante’s relationship was and tells Lulu if it was perfect, the Valerie thing would never have happened. Lulu starts to realize that Valerie is not the problem – she’s a symptom. Can Lulu get Johnny to stop in time? Nah…

Jordan Ashford (Vinessa Antoine) and Anna Devane (Finola Hughes) are lurking around Sabrina Santiago’s (Teresa Castillo) apartment looking for clues about Carlos Rivera (Jeffrey Vincent Parise). Have these women heard of a warrant, by the way? They just kicked in the door for no cause.

The doorknob rattles and they’ll pull their guns – is it Michael Quartermaine (Chad Duell) coming back to chat with Felix DuBois (Marc Samuel)? Michael informs someone that Sabrina has left town. Anna and Jordan must know that means Carlos is gone too, so what’s next?

With Carlos gone, that only leaves Paul Hornsby (Richard Burgi) in their sights for now. Anna reaches out to Robert Scorpio (Tristan Rogers) and pulls him into the investigation. Looks like the gang is going to dig into Paul’s past to look for dirty laundry and ties to the mob, the Jeromes and Carlos.

Julian Jerome (William deVry) is annoyed when he and Alexis Davis (Nancy Lee Grahn) come to the Crimson office and find joy rather than sadness. Nina Clay (Michelle Stafford) made a smash hit of that awful green issue – partially because she bought up a bunch of copies.

But still, there’s no denying that the failure Julian hoped for is not happening. What will Julian do about his tax problems? Good thing he’s sleeping with a lawyer… Looks like Nina is a publishing success. What’s next for the Crimson crew?

Don’t miss a moment of the Thursday, January 14 episode – share your comments below and come back to CDL every day for detailed “General Hospital” spoilers and news.