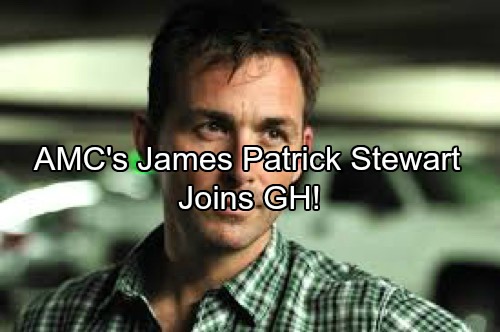 ‘General Hospital’ (GH) spoilers tease that ‘AMC’ alum James Patrick Stuart has joined the cast of the ABC daytime drama in an exciting new mystery role. Soap Opera Digest broke the news on June 16 – announcing that the former ‘All My Children’ star is already on the set of ‘GH’ and spoilers indicate that his first air date on the ABC soap opera will be in July.

Fans of the now cancelled soap opera ‘All My Children’ will remember James Patrick Stuart as Will Cortlandt, he appeared on the daytime drama from 1989 – 1992. Will was the brother of fan favorite Dixie Cooney (Cady McClain), and the nephew of Palmer COrtlandt (James Mitchell).

‘AMC’ fans will remember that before Stuart exited the soap, he had transformed in to quite the villain.

It’s unclear whether or not James Patrick Stuart’s ‘General Hospital’ character will be a good guy or a bad guy when he arrives in Port Charles, at this time we don’t even know the name of the character that the newbie will be playing.

We don’t even know how long Stuart will be on the canvas, he may just arrive, drop a bomb on the less than sleepy town, and then catch the next bus out of town.

Considering all of the mob nonsense and crime in Port Charles, there is a pretty good chance that James Patrick Stuart’s character could be caught up in that drama. With Nathan (Ryan Paevey) on the verge of making an arrest in the Carlos (Jeffrey Vincent Parise) case, Stuart could be brought in an as someone’s lawyer or a law official.

Either way, we are sure that he will make a great addition to the ‘General Hospital’ cast.