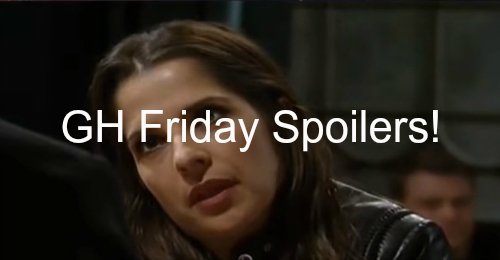 General Hospital (GH) spoilers for the Friday, June 17 episode show more action in London with Sam, Jason, Nikolas and Ava, while Curtis strips down and tempts someone, the dagger tests are back, and Nathan makes an arrest that stuns Sonny.

Sam Morgan (Kelly Monaco) and Jason Morgan (Billy Miller) head to London on their quest to find Nile Carradine aka Nikolas Cassadine (Tyler Christopher). They will miss the Prince who may be in danger thanks to Ava Jerome (Maura West).

Looks like when Ava and Nikolas climbed in their 6 am car to head to the airport, it was a minion of Huxley Lynch (Trent Dawson) that picked them up and the duo have been kidnapped. Ava is indignant and tells the guy she’s going to call the cops.

No way will Huxley’s man let that happen. Nikolas and Ava seem to be at Huxley’s manor house which is where he was trying to get them with more polite invitations. Now he’s irritated and just took them. But what does Huxley want? 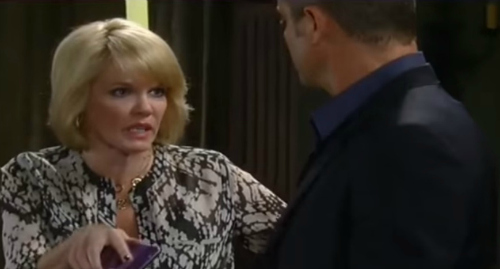 General Hospital spoilers reveal this is about the antiquity that Ava just bought – it’s a statue that Huxley wants back because it’s a family heirloom. How long before Sam and Jason track them to the manor house. Will Ava and Nik escape?

Maxie Jones (Kirsten Storms) and Nathan West (Ryan Paevey) have a serious talk about marriage. Maxie will ease up on him shooting the dude that Claudette (Bree Williamson) was sleeping with thanks to Griffin Munro (Matt Cohen). 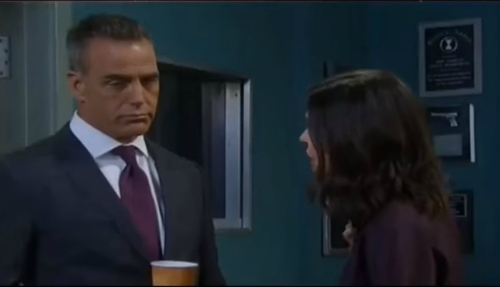 He pushes for justice and then Sonny will go see Alexis Davis (Nancy Grahn). Anna and Paul talk about Carlos and Julian – Anna is frustrated that Jordan Ashford (Vinessa Antoine) cut her out.

General Hospital spoilers tease that Anna will make a devil’s bargain with Paul who might go over Jordan’s head to get Anna back on the case. Sonny tells Alexis that Julian is going down and things don’t look good for her.

Will Sonny be there when the Carlos killing arrest is made? The forensic tests on the dagger are back and a warrant is issued for Nathan to serve. All signs point to Alexis being arrested and Sonny  is absolutely stunned.

Over at Crimson, Nina Clay (Michelle Stafford) considers hiring Curtis Ashford (Donnell Turner) who shows her his sexy abs. But what kind of job is it that putting his physique on display is part of the interview?

Julian talks to Nina about a deal to shore up his alibi and make sure he’s not a suspect. Nina stands up for Julian and General Hospital spoilers tease that Olivia Falconeri (Lisa LoCicero) sees Julian and Nina.

They look cozier than Olivia thinks is appropriate for work and will wonder what’s up. What bargain will Nina and Julian strike? Share your comments below on these spoilers for the Friday, June 17 GH episode.

Be sure to check back with CDL often for more General Hospital spoilers and news.