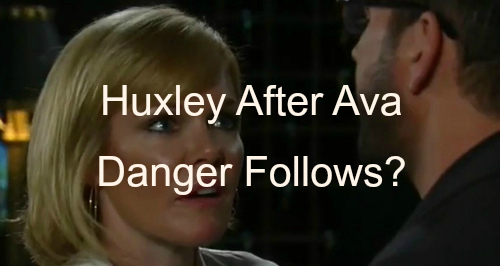 General Hospital (GH) spoilers reveal that Huxley Lynch (Trent Dawson) is not who we thought at a glance and, in fact, the smooth British operator will soon prove to be downright dangerous. The big twist is that he’s not after Nikolas Cassadine (Tyler Christopher) but is targeting Ava Jerome (Maura West).

Remember that Ava told Julian Jerome (William deVry) that she had acquired an antiquity that wasn’t a fit for her gallery? She mentioned that she was going to Europe to market the piece there. Turns out, that’s what this whole Huxley scheme is about!

The piece in question is a statue and Ava is carrying the valuable artwork with her. Huxley believes that the statue is an heirloom that belongs to the Lynch family and will do anything (and everything) that he has to in order to get it back.

We’ll soon see that Ava and Nikolas continue to be thrown together in this scheme and they may initially think that Huxley is after Nikolas. Ava and Nik told Huxley that the Prince is Nile Carradine, an actor. But, in fact, Huxley doesn’t seem to know or care who he is.

It’s Ava that Huxley has an eye on and that he called his assistant Margarethe (Diane Delano) about. The flight was taking off from Port Charles and heading to England. Looks like Huxley was in Port Chuck and following Ava to recover his family treasure.

It’s convenient for him that Ava got the warning to skip town from Julian and hopped the flight which will put her in his backyard – where Huxley can get his hands on Ava and the statue. But don’t expect Ava to go down without a fight.

General Hospital spoilers show that Huxley has Ava and Nikolas at his estate and then all heck breaks loose. Ava likely won’t agree to hand over the statue – no doubt she paid big bucks for it. Plus, Huxley may have bitten off more than he can chew. 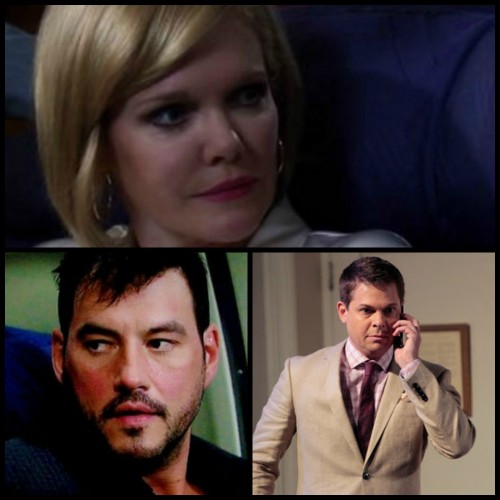 When Hux lures Ava and Nikolas to his estate, he may think he’s inviting over a pampered actor and a small-town art dealer. In fact, what he’ll have on his hands is a former mob boss and stone cold killer who has no compunction about violence.

And the guy Huxley thinks is an actor on vacation? Nik is a ruthless individual who tried to have his wife killed and will get his hands dirty when he needs to. Huxley’s dinner party could leave him with a nasty surprise.

If Ava and Nikolas team up to take on Huxley, which they will, he won’t stand a chance. General Hospital spoilers reveal this will turn into a dangerous deal and someone will get hurt – but who will it be? Knowing Ava and Nikolas, the odds are it’s Huxley who’s in for bodily harm.

We’re also wondering, since Ava is single and Nikolas just played dead to get away from his wife Hayden Barnes (Rebecca Budig), will these two get close in coming days? Remember when Ava told Nikolas that he had her in her favorite position?

She meant being owed a favor, but the subtext was all about other positions. What’s interesting is that Maura West and Tyler Christopher are only a year apart in age. Maura is 44 and Tyler is 43 even though he’s playing younger.

That’s a much more appropriate pairing than Maura with 24-year old Bryan Craig. Perhaps Ava and Nikolas will escape Huxley’s estate intact, with her expensive statue, and with a new romance brewing. We’ll see what happens!

Share your comments below on the twisty storyline with bad Brit Huxley, Ava and Nikolas. And be sure to check back with CDL often for more General Hospital spoilers and news.