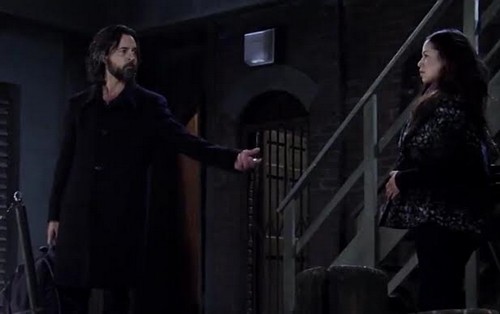 What led to this dramatic kicking in of her door – and what will happen next? GH spoilers indicate that Anna has decided that Sabrina is their best shot at nailing Carlos since she found the St Christopher medal on the docks with both their names on it.

Anna is assuming a lot – as far as she knows, the baby Sabrina is carrying is Michael Quartermaine’s (Chad Duell) unless Anna did the math on Sabrina’s due date and has counted back to the night Carlos disappeared.

Anna knows Sabrina was tied up when Carlos took off, but she may not believe anymore that Sabrina was Carlos’ prisoner – and was more likely aiding and abetting him – which is the fact of the case. What Anna really wants is peace of mind about the shooting – and to nail Carlos.

But Carlos isn’t even her end game anymore. Anna believes that Paul Hornsby (Richard Burgi) helped Carlos fake his death. However, Kyle Sloane (Robb Derringer) was also likely involved – seems like her gun needed blanks in it – otherwise she could have shot Carlos in the head rather than chest.

The only one who had access to her gun back then was Sloane – but it’s unsure if Sloane knew that Paul was involved since Paul murdered Sloane once he started blabbing. Was Sloane simply Carlos’ accomplice? Or was he working for Julian Jerome (William deVry) as well?

Paul is not the top dog of this new mob force in Port Charles – we know that – we’ve heard him deferring to someone on the phone. And GH spoilers tease that the Jerome cartel may have never left Julian’s hands – he just pretended to wash his hands of the organization for sake of appearance.

Pretending to go legit – then hiring Paul who also looks legit as another layer of security – is clever. Then putting Ava Jerome (Maura West) out there as the face of the organization gives both of them a measure of protection.

But would Julian put his sister out there like that? He would if it meant he could keep Alexis Davis (Nancy Lee Grahn) at his side – and to protect his son Leo. There’s no telling what Julian would do. But even if Julian isn’t Paul’s puppet master, he’s not out of trouble.

Anna is gunning for all three – Carlos, Paul and Julian – although not literally. Anna has learned her lesson about shooting first. She wants to see them behind bars, not in body bags. This is ultimately about avenging Duke Lavery’s (Ian Buchanan) death.

That’s what makes Anna so dangerous to them. This is not just a cop working a case – this is deeply personal to her. Julian ordered Carlos to shoot the love of her life – then Paul orchestrated Carlos’ getaway. If only Carlos had stayed gone…

Anna is right that Carlos is still staying close to Sabrina, but it looks like she could be too late. GH spoilers reveal that Carlos makes an impassioned plea to Sabrina to leave Port Charles with him while they’re standing on the docks.

Carlos has a packed bag in his hand – it looks like he’s ready to skate out of Port Charles for good. Will Sabrina go with him? GH spoilers indicate she just might head out of town with her bad boy and Anna may have missed her shot at Carlos again.

Sabrina portrayer Teresa Castillo is due for maternity leave any day now – will she take her leave on the run with Carlos? Will Anna gun down Carlos again – this time for good – while Sabrina watches? How will this play out – will Carlos get away? Get sent to Pentonville? Or meet his maker for real?

It’s doubtful this storyline will come to a conclusion with the raid at Sabrina’s place. With Julian and Alexis planning their wedding – Nancy Lee Grahn tweeted recently that she had a wedding dress fitting – it seems like it will all boil over closer to their nuptials and put the Julexis relationship at risk…

What do you think GH fans? Will Carlos and Sabrina get away – will Carlos live to make trouble another day? Will Anna continue to be frustrated and will Paul be left to continue making trouble with no clue that Anna and Jordan’s net is closing in on him?

Share your thoughts in the comments below and come back to CDL often for more “General Hospital” spoilers and news.