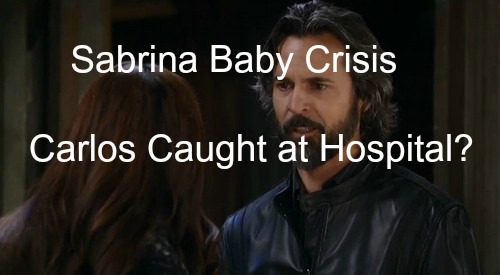 “General Hospital” (GH) spoilers tease that Sabrina Santiago (Teresa Castillo) will face a health crisis as the due date of her baby with Carlos Rivera (Jeffrey Vincent Parise) approaches. Will Sabrina’s medical emergency be the thing that finally gets Carlos caught by Anna Devane (Finola Hughes)?

Two developments conspire to push Sabrina to the brink in coming days. The first is Michael Quartermaine’s (Chad Duell) continued refusal to reunite with Sabrina and look past her paternity lie. Because of this, Sabrina will take a big risk soon as a last ditch effort to win him back.

The second is Anna’s pursuit of Carlos. Anna is now surer than ever that Carlos is alive and back in Port Charles. Anna is also certain that Paul Hornsby (Richard Burgi) helped Carlos fake his death and killed Kyle Sloane (Robb Derringer) to cover up his other crimes.

Anna also knows how much Carlos loves Anna and suspects that if Carlos is in town, he will be in touch with Sabrina. Anna will decide to turn up the heat on Sabrina very soon. Unfortunately, Sabrina is already upset about getting dumped and losing a good father for her baby.

So when Anna comes to grill Sabrina on Carlos, it won’t go well. No, Sabrina doesn’t know where Carlos is for sure – but he did leave her information on where to find him when he left town. Except he likely did not leave town given how close she is to delivering his baby.

Anna is like a dog with a bone now that she’s figured out Paul is in the mix and Carlos is alive. For Anna, this all ties back to Duke Lavery’s (Ian Buchanan) murder since she know Carlos shot him, Julian Jerome (William deVry) ordered it and Paul is tied to both of them – or so she suspects.

When Anna steps up the pressure on Sabrina – who is, at her heart, a good law abiding young woman – the stress will be too much. Although Sabrina is far enough along in the pregnancy for her baby to be safely delivered, she might not survive the health crisis if there are complications.

Sabrina will be rushed to the hospital – and if Carlos is keeping an eye on her like we suspect – he may also go there. We’ve seen Carlos lurking around GH before behind a surgical mask wearing scrubs – could he do so again? Will Sabrina’s extreme stress put her baby at risk?

And if Anna takes Sabrina to the hospital, rides along, or follows, she may be lurking around GH just as Carlos is trying to get access to Sabrina and be present at the birth of his child. Will Carlos put his freedom at risk to be there for Sabrina?

And if Anna nabs Carlos at the hospital, will she at least allow him to see the birth of his child before she has the PCPD haul him away? Also to ponder is whether Anna would call the cops to pick up Carlos or if she and her little team of investigators will question him in private about Paul before handing him over.

We know that Teresa Castillo is set to take maternity leave for several weeks so that could play into all of this – GH showrunners could send Sabrina back to Puerto Rico, throw her into a coma for a couple of weeks, or move the baby somewhere for treatment so Sabrina follows along.

Either way, there’s lots more to come with Sabrina, Michael, Carlos and Anna. Don’t miss any GH episodes and be sure to check back with CDL often for detailed daily “General Hospital” spoilers, news and updates.