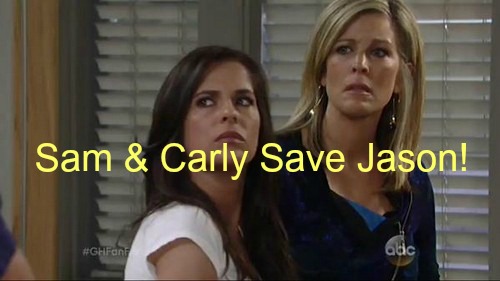 “General Hospital” (GH) spoilers reveal that Nikolas Cassadine (Tyler Christopher) will soon use the fight at the MetroCourt where he was thrown over the balcony to get control over Jason Morgan (Billy Miller). But the women in Jason’s life won’t sit still for this.

Unbeknownst to Jason, Liz Webber (Rebecca Herbst) appealed to both Nikolas and to Hayden Barnes (Rebecca Budig) to get them to tell the Port Charles cops that what happened to Nik was an accident. Hayden refused and Nikolas is playing dumb at this point.

It doesn’t look like Liz was able to persuade Nikolas or Hayden to back off of punishing Jason for his actions. But it’s a good thing for Jason that Liz isn’t the only one in his corner. The two more aggressive women in Jason’s life will soon take this on and try and exonerate him.

Sam Morgan (Kelly Monaco) and Carly Corinthos (Laura Wright) will pair up and put both their considerable skills and vigor towards proving that Jason did not intentionally harm Nikolas. Those two individually are forces to be reckoned with – but together, they will be unstoppable.

So how can Sam and Carly prove Jason’s innocence? Damien Spinelli (Bradford Anderson) may also help them out as they search for evidence to exonerate Jason – but since only Nikolas and Hayden were on the roof with Jason, what can they find?

The MetroCourt doesn’t seem to have security cameras on the balcony, but maybe cameras nearby were aimed at that area. Hayden may also prove to be a resource for them. Hayden is about a hair’s breadth from finding out that Nikolas tried to have her killed.

Once Hayden knows this, will she be willing to reveal the truth to Carly and Sam that Nikolas started the fight and Jason was defending himself? That’s hard to call since Hayden also sees Nik as her meal ticket – but if she’s got money rolling in from her ELQ spying, maybe she doesn’t need him.

Sam and Carly can also try and pressure Hayden or Nikolas into revealing the truth – or try to trick them into a confession. This is a tough one since Jason himself isn’t entirely certain that he deserves to be exonerated for the attack – Jason takes a dim view on his own propensity for violence.

Sam and Carly not only need to figure out what happened to get Jason out from under Nikolas’ thumb and at risk of jail – but they also need to get Jason to see that he’s worth saving. Liz will no doubt keep working on things from her side but don’t look for Sam and Carly to let her join their reindeer games.

Who will it be that finds the proof needed to get Jason off the hook for the balcony assault? Will it be Sam, Carly, Liz – or Jason himself that gets the goods? Share your thoughts in the comments below and come back to CDL often for more “General Hospital” spoilers and news.