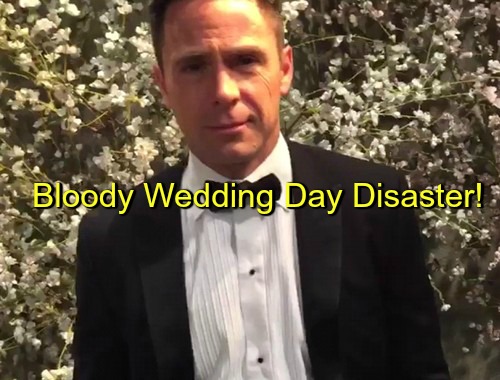 Sonny has been plotting for weeks now to take down Ava Jerome (Maura West) during the next big gun shipment from Raj. Sonny is also still clueless that Ava is not the mastermind and it’s Paul Hornsby (Richard Burgi) running the show. Plus there’s a new bad guy named Dixon we’ve yet to meet.

GH spoilers reveal that when Sonny makes his move to take out Ava, a major gun battle will rage on the docks that will involve Morgan Corinthos (Bryan Craig) plus the Jerome and Corinthos cartels. It’s also been revealed that Morgan will shoot someone he doesn’t mean to.

Spoilers lean heavily towards this being Lulu Spencer (Emme Rylan) shot but it could also be Ava herself or Kiki Jerome (Hayley Erin) as likely victims of Morgan’s errant gun play. Morgan is frustrated that he can’t function in the sack, so he’s going to go off of his bipolar meds.

This leads to a dark spiral and Morgan will get a gun and try to play gangster as his dad makes his move to take down Ava. The spoiler pic below shows Sonny at the church with Olivia Falconeri (Lisa LoCicero) and he’s in his wheelchair right behind Franco (Roger Howarth) and Nina Clay (Michelle Stafford). 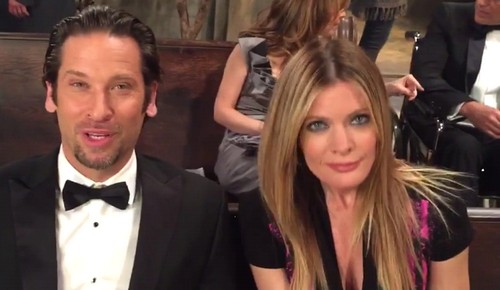 We know Sonny will be fully on his feet by then, even though he’s still pretending to be paralyzed. GH Valentine’s Day spoilers show Sonny vertical and getting busy with Carly Corinthos (Laura Wright) so it looks like he will be ready to spring into action for the big mob showdown.

But just how bloody will this be? Who will be wounded? Will the shooting spill over into the wedding itself? Or will the ceremony go off without a hitch and then the mob madness begins? Will Julian say his I do’s and then be injured helping his sister sort out her mob mess?

GH spoilers hint that as soon as Julian and Alexis marry, they will face major obstacles. This could mean a wounded Julian, wounded Ava, Ava and Sonny wounding each other, plus whomever Morgan shoots. This mob shootout is supposed to be a big finale to February sweeps along with the Julexis wedding.

So no doubt we can expect blood and a few bullet holes plus lots of gangster extras getting killed off. Let’s hope we don’t lose any core characters, though. And we do have to wonder if Michael Easton’s new character will be on-scene by then and could feature in this bloody showdown storyline. For more General Hospital spoilers and news check CDL regularly.