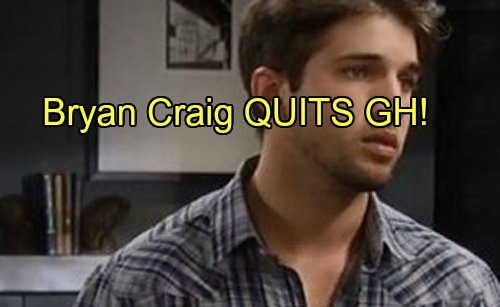 ‘General Hospital’ spoilers indicate that Bryan Craig [Morgan Corinthos] has quit and is exiting the daytime drama. The report that Bryan is leaving comes hot on the heels of ‘GH’ spoilers that Tyler Christopher [Nikolas Cassadine] isn’t returning and his role will be recast.

Daytime Confidential has received information from many sources that the Daytime Emmy winner has made the decision not to resign and not renew his contract. These ‘GH’ spoilers reveal that TPTB are keeping any details about Bryan Craig’s exit a secret.

If the sources are correct that could leave TPTB in a serious bind. Sonny Corinthos [Maurice Bernard] and Carly Corinthos’s [Laura Wright] son has played a huge part of several storylines for over the past couple of years.

From Morgan’s relationships with both Ava Jerome [Maura West] and Kiki Jerome [Hayley], a mother/daughter love triangle Kiki of which poor Kiki wasn’t aware to Morgan’s bipolar disorder diagnosis, Morgan is an important part of the soap opera.

Because ‘General Hospital’ spoilers indicate Bryan’s choice to leave the show is hush-hush, no one is sure what happened. Is the actor moving on to another project? Does fiancée Kelly Thiebaud [Dr. Britt Westbourne] have anything to do with Bryan’s decision to decline renewing his contract?

Only time will tell if this ‘GH’ spoiler that Bryan has decided not to renew his contract is 100% true. Just last week the actor posted a link to an event on September 21 in which he plans to discuss working on ‘General Hospital.’

Is this ‘General Hospital’ news final? Has Bryan Craig quit and is he leaving the daytime drama? If so, will TPTB recast the role or somehow write Morgan out – will Morgan be killed or perhaps commit suicide due to his bipolar spiral? A recast seems like the most obvious thing to do. Morgan is in the middle of way too many storylines to be written out completely without messing up the show.

What do you think ‘General Hospital’ fans? Will Bryan Craig actually vacate his role as Morgan or will the showrunners be able to entice the actor into signing a new contract? Come back to CDL for all your General Hospital spoilers and news!

Update: Bryan Craig has confirmed on Twitter that he has left General Hospital – his final air date is in November, 2016.

It’s the beginning of the end. pic.twitter.com/yLeTOglb4q

Are they telling the truth? pic.twitter.com/SB3fsniu1q

I am extremely grateful to @ABCNetwork , Frank Valentini and the entire GH cast and crew for the opportunity and their unyielding support.

To the wonderful fans who have embraced and loved Morgan as one of their own, I thank you from the bottom of my heart.